In an important development for the entire renewable energy sector—and a story we have been following since last year—the exciting partnership between Washington State University, the USDA National Institute of Food and Agriculture, the Northwest Advanced Renewables Alliance (NARA) and Alaska Airlines has come to fruition. The goal of the project was to produce 1,000 gallons of cellulosic-based bio-jet fuel derived from Northwest forest residues for use on a demonstration flight and on November 14, Alaska Airlines sent a Boeing 737 jet on the first commercial airline flight that was partially fueled by the NARA biofuel.

The jet took off this from Seattle-Tacoma International Airport and headed to Reagan National Airport in Washington, DC with its tanks full of 1,080 gallons of a cellulosic biofuel blend. Twenty percent of the jet fuel came from wood waste that was collected during timber harvests or thinning operations on land owned by Weyerhaeuser in Oregon, the Muckleshoot Indian Tribe in Washington and the Confederated Salish Kootenai Tribes in Montana, as well as waste fibers from Cosmo Specialty Fibers in Cosmopolis, Washington. 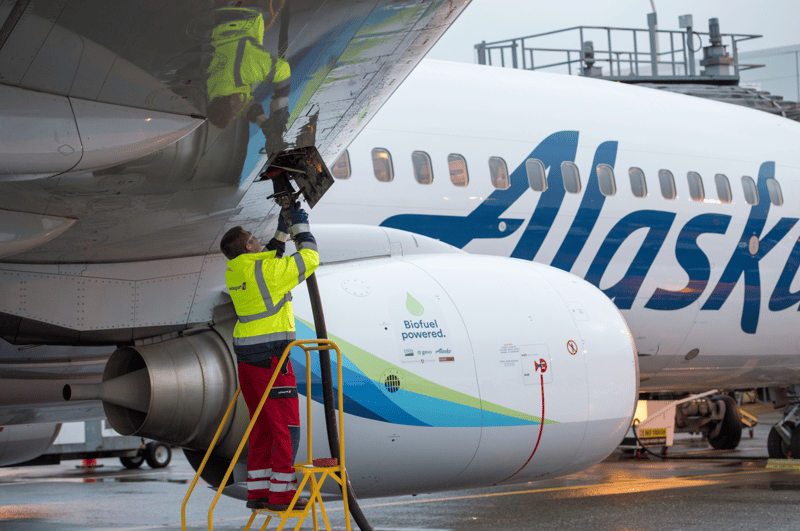 Almost half of the Pacific Northwest (PNW) is covered by dense forests, which are being accessed less and less frequently for their valuable wood fiber due to regulation and legal impasse. We have noted that, when managed properly, working American forests are sustainable and offer an abundance of benefits to all citizens. In the case of a timber harvests in the PNW, residues from these harvests could be a potential feedstock for biofuels and co-products, and NARA has provided a roadmap to make this a reality.

To reduce costs and supply an appropriate feedstock for conversion, NARA work has resulted in:

This partnership has demonstrated that viable renewable fuels solutions do, in fact, exist. NARA’s forest-based blend also offers a number of advantages as an aviation biofuel:

“This is just one flight today,” said Joe Sprague, senior vice president for communications and external relations at Alaska Airlines. “But can you imagine if all of our flights out of Sea-Tac were operating with 20 percent of their fuel sourced from biofuels? That would be the equivalent of taking 30,000 cars off the highways here in the Seattle region.”

US Senator Maria Cantwell (D-WA), a champion of America’s working forests, noted that “Today’s flight comes after years of investments to help the aviation biofuels industry take off. By creating these sustainable biofuels, we will revitalize our rural agricultural communities, foster economic growth, reduce greenhouse gas emissions and cut our dependence on foreign oil while growing our competitiveness in global markets.”

Other aviation ventures are actively seeking out sustainable and viable biofuels as well. As we have noted, Boeing has been working with an assortment of partners to pioneer sustainable aviation biofuels, and FedEx has entered into an agreement with Colorado-based Red Rock Biofuels to purchase alternative jet fuel made from wood waste, which will support the company in its goal of procuring 30 percent of its jet fuel from alternative sources by 2030.

The NARA/Alaska Airlines partnership has made history by flying the first commercial flight using the world’s first renewable, alternative jet fuel made from forest residuals. This milestone exemplifies yet another reason why maintaining America’s working forests is so vitally important to the future of our country and our shared environmental, economic and energy needs.