Can US Hardwood Exports Outlast the Global Trade War?

In November 2017, we published a comprehensive analysis covering the Northeast and Appalachia that illustrated the large increase in hardwood log and lumber exports from those regions that were going to China, and the downward trend recorded for exports headed to other countries. A mere two years later, we are witnessing just how fast international markets can change.

Significant challenges have plagued the North American hardwood industry since that analysis was published, and the dramatic shift in export trends and fiber demand has impacted the entire supply chain. As a follow-up to our recent coverage of this market, we performed an updated analysis that helps to uncover some of the key areas impacted over the last 17 years, which helps us intuit some general understanding on the direction of the hardwood export market.

Our original analysis included full-year information from 2005 through 2016 and annualized data for 2017 based on January through September actual data. Information for the entire US, the Northeast regions and the specific four northeast Appalachian states (NY, OH, PA & WV) was presented. These breakdowns were used since about a third of US hardwood log and lumber exports originated in the Northeast and the four Appalachian states accounted for roughly 80 - 90 percent of the exports from the that region. The analysis also illustrated the large increase in US hardwood log and lumber exports to China and the downward trend recorded for exports to other destinations.

To gain a broader understanding about this market on a national level, the new analysis expands across the four regions shown on the map below rather than concentrating on the Northeast and the specific Appalachian states. For a more comprehensive view, the new analysis also covers exports beginning in 2002 through an annualized estimation for 2019 (based on January through August actuals). The harmonized system (HS) codes used in this analysis are the same as those used in the original 2017 research. 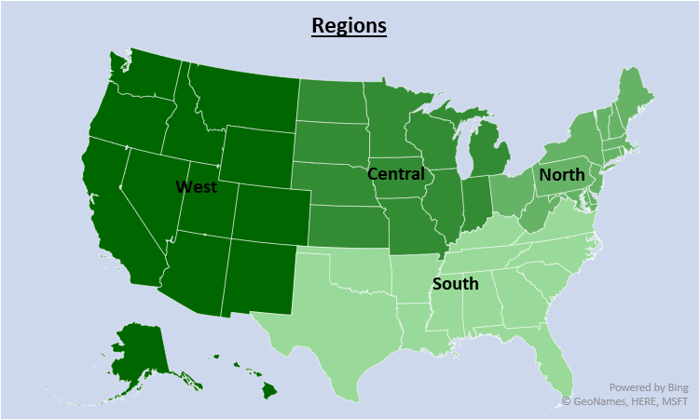 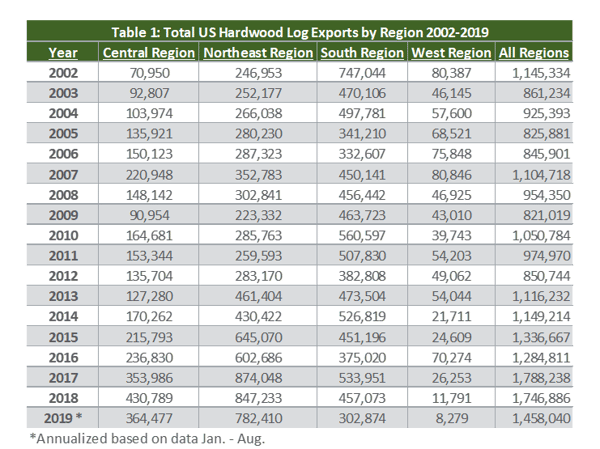 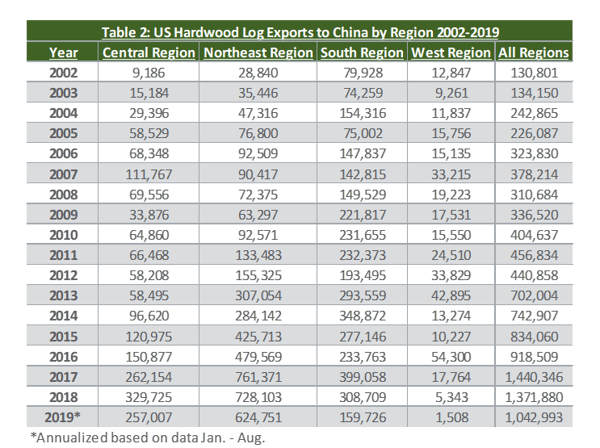 Figure 1 illustrates just how important China has become as the primary importer of American hardwood logs over the last 17 years. The area under the red line represents exports to China and the black line indicates total exports. It is also easy to see the decline in hardwood exports to countries other than China, which is represented by the area between the black and red lines. 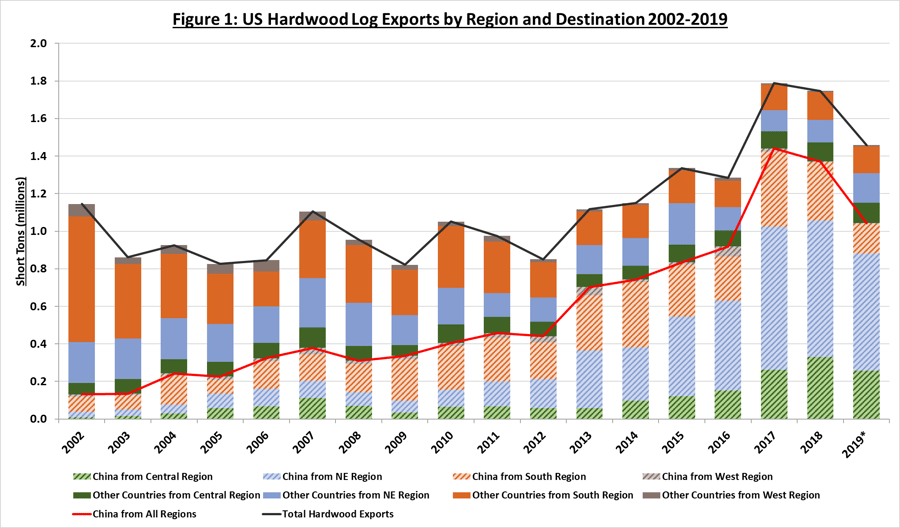 Figure 2 illustrates the same information, only graphically presented in an altered order to better illustrate the regional trends. Hardwood log exports from both the Central and Northeast regions have increased over the study period while those from the South and West regions have declined. This chart also helps visualize the tremendous increase in exports to China from the different regions. 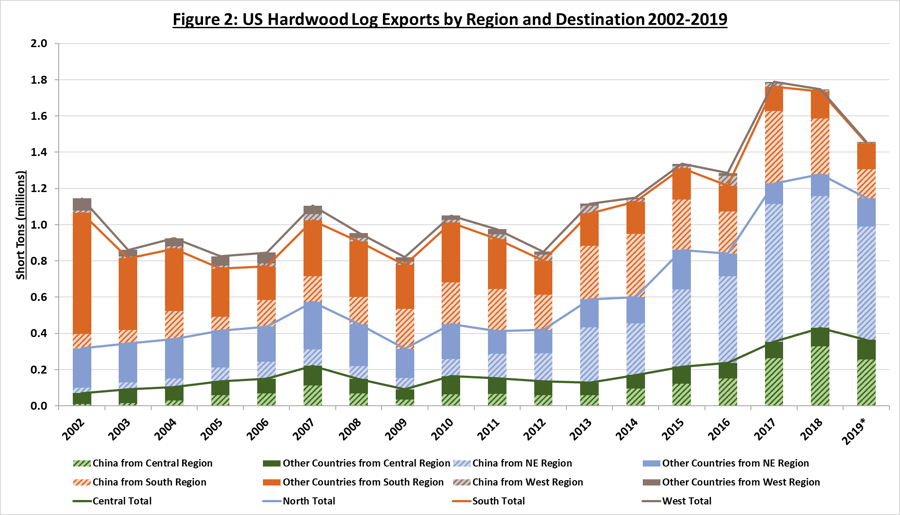 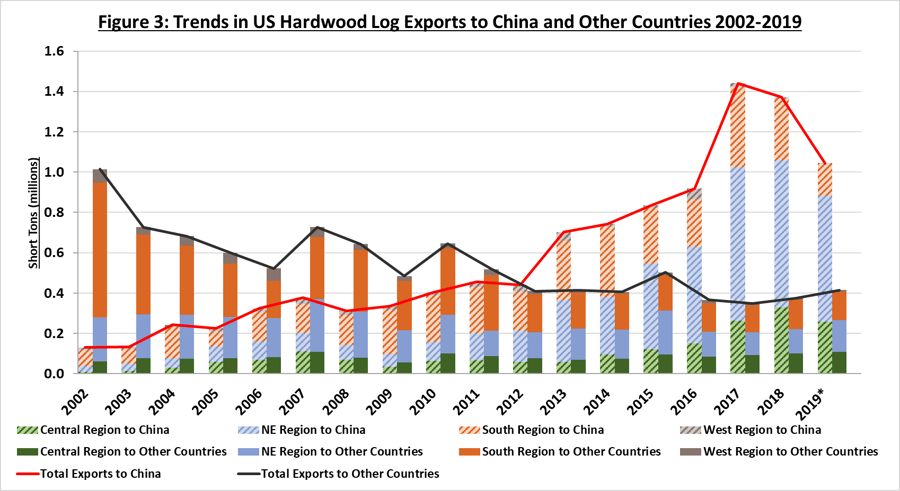 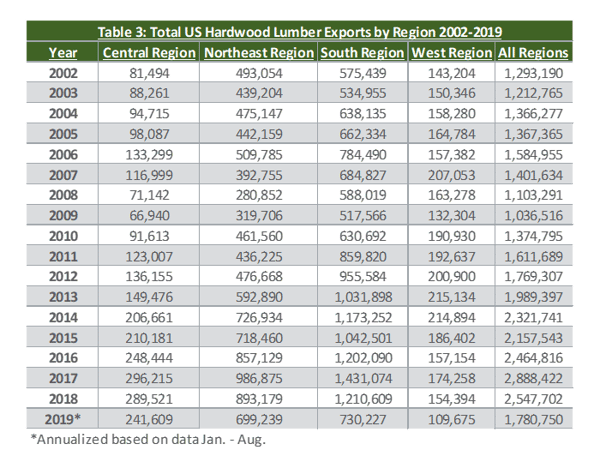 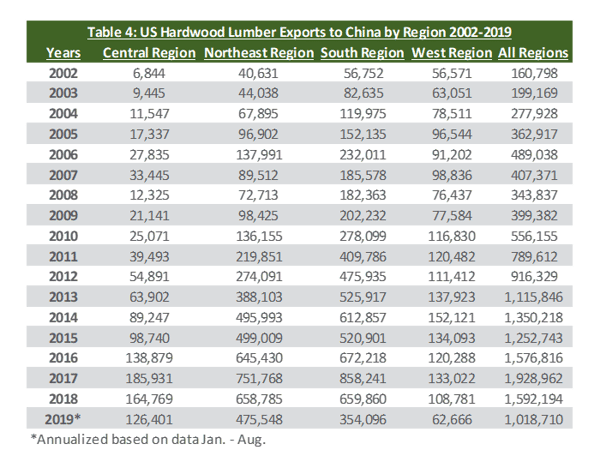 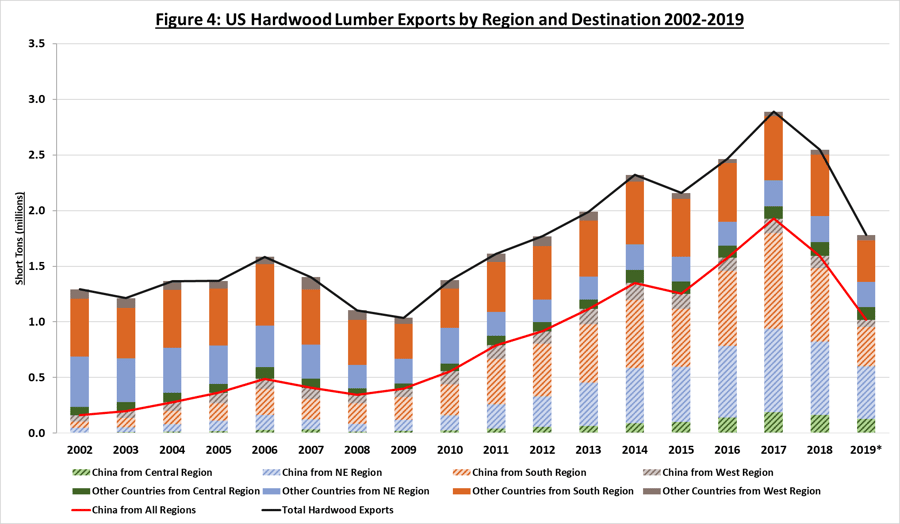 Figure 5 includes the same information that is graphically presented in an altered order to better illustrate the regional trends. Total hardwood lumber exports from the Central, Northeast and South regions have increased while those from the West have declined. 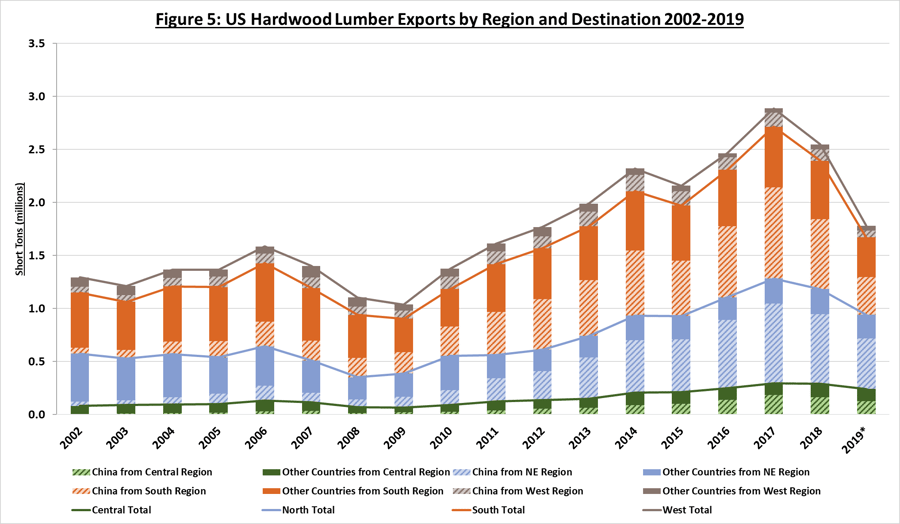 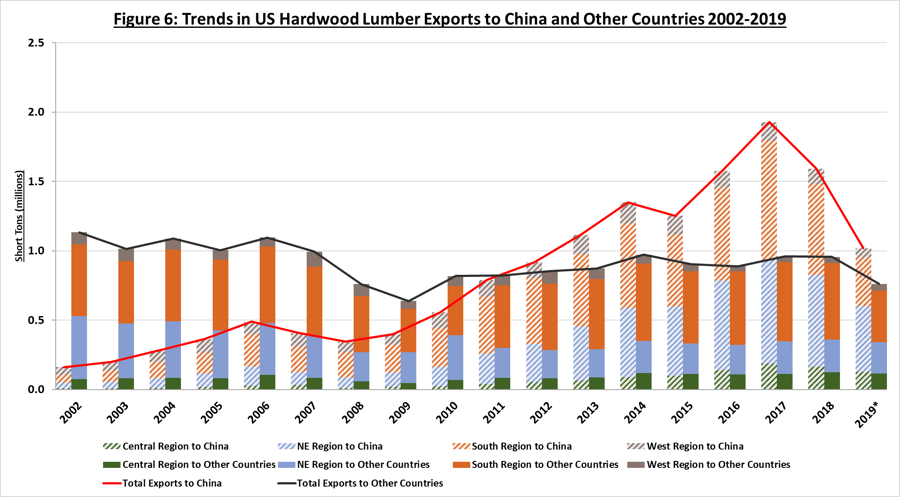 While our first analysis of hardwood exports concentrated on the Northeast and the four Appalachian states due to the increased demand occurring at that time, the new analysis uncovers some noteworthy findings.

Most importantly, this analysis should help to alleviate some of the concern that many hardwood producers have about the long-term state of the market. While certain regions have fared better than others during the face-off with China, the data above illustrates that hardwood log and lumber exports are still high compared to recent history. We are not even two years removed from the high point of 2017, which makes the current decline seem all the more pointed. However, the export volumes of both hardwood logs and lumber have soared over the last 17 years, and they are still significantly higher in 2019 than they were 10+ years ago.

Certainty remains in short supply these days but on this point, I am certain: The US is home to the most abundant, sustainable supply of high-value, top-quality and diverse hardwood products in the world. While the industry is not immune to market fluctuations, demand for American hardwoods remains strong. The data in this analysis suggests there is every reason to believe that a lift in demand will return once a long-term trade solution is reached, providing a level of assurance to the market.

Note: Short ton is the reported measurement unit used in the US Census Bureau data base. However, hardwoods are generally measured in terms of board feet. As rough approximations to board feet, logs can be converted using 6.5 ton/mbf and lumber using 1.67 ton/mbf. Using those factors for the 2017 peaks would place hardwood log exports at slightly over 275 million board feet and hardwood lumber at about 1.73 billion board feet.

Lumber Prices
WRI Market Insights: Global Softwood Lumber Markets
Global trade of softwood lumber fell about 10% in the first half of 2022 compared to the same period in 2021. Most of...
END_OF_DOCUMENT_TOKEN_TO_BE_REPLACED

Lumber Prices
Southern Lumber Prices Continue to Inch Down
After jumping 12% in August due in large part to strong demand from the multi-family construction sector, US housing...
END_OF_DOCUMENT_TOKEN_TO_BE_REPLACED

Timber Prices
Halt in Russian Exports, Reduced Demand in China Contributed to a 20% Decline in Global Softwood Log Trade
Global trade of softwood logs plunged by 20% during the first half of 2022 year-over-year (YoY). Much of the decline...
END_OF_DOCUMENT_TOKEN_TO_BE_REPLACED