The ground is beginning to decisively shift regarding climate change. Broad public recognition and acceptance of the impending consequences associated with climate change is rippling through the finance and corporate sectors and, as is typical in the US, politicians are getting on board last.

Many leaders at both political and corporate levels are taking proactive measures in their own camps. Moving beyond the hyperbole, the real discussion is turning from “should something be done,” to “what can be done.”

A November 2019 survey conducted by researchers at Yale and George Mason University divided Americans into six segments according to their views on climate change. The segments ranged from “Dismissive” (hardcore deniers) to “Alarmed” (climate hawks).

The results illustrate the shockingly short timeframe in which the ground has shifted around the topic of climate change — no doubt driven by constant attention from both cable and social media outlets. 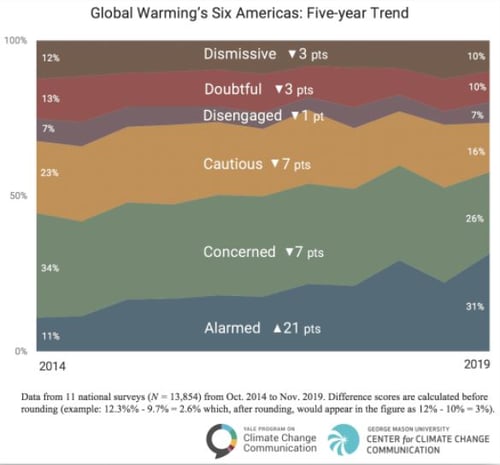 In 2014, the Dismissive outnumbered the Alarmed. Today, the Alarmed account for the largest slice of the public, almost a third of all Americans. Collectively, Alarmed plus Concerned now represent 57% of the population.

What is taking place at both market and political levels that signals an abrupt change of course?

The investment community has recognized climate change as a long-term disruption to global economics and the potential impact on corporate returns. And not to be forgotten, those working in the financial and investment sector are also informed and concerned individuals. As a result, significant companies in the financial sector are aligning their investment portfolio consistent with reducing climate change.  BlackRock, the world’s largest asset manager with more than $6.8 trillion under its control, has signed on to Climate Action 100+, an investor initiative aimed at ensuring the world’s largest corporate greenhouse gas (GHG) emitters take necessary action on climate change.

MarketWatch noted last month that “BlackRock joins more than 370 global investors, including pension giant CalPERS and HSBC Global Asset Management, already participating in the initiative, which aims to sway companies ranging from fossil-fuel producers to consumer-product conglomerates to be carbon neutral by 2050.”

With a collective $41 trillion under management, the priorities of Climate Action 100+ are being felt by corporations seeking capital.

There is an increasing stream of companies who are establishing bold and significant targets for themselves.

Per the official press release: “BP’s new ambition to be a net zero company by 2050 or sooner covers the greenhouse gas emissions from its operations worldwide, currently around 55 million tonnes of CO2 equivalent (MteCO2e) a year, and the carbon in the oil and gas that it produces, equivalent currently to around 360 MteCO2e emissions a year – both on an absolute basis. Taken together, delivery of these aims would equate to a reduction in emissions to net zero from what is currently around 415 MteCO2e a year.”

It is notable that the BP objectives encompass what is referred to as “Scope 3” emissions – not only the emissions directly associated with their internal carbon emissions from production and distribution of their products, but also the emission resulting from the use of their products. This bold project will serve as a corporate model for attaining net zero emissions while pursuing an industry-leading ambition of helping the world get to net zero.

BP notes five aims to get the company to net zero:

“We need to reinvent BP,” chief executive Bernard Looney said in a statement.

“Simply put, we have got to change. We want to change. And we will change,” Looney added via Instagram. “The world’s carbon budget is finite and running out fast; we need a rapid transition to net zero. We all want energy that is reliable and affordable, but that is no longer enough. It must also be cleaner.”

While BP is leading the petrol-industry charge in many respects, it’s not the only multinational corporation making proactive progress without a regulatory framework.

While better late than never, Washington seems to be bowing to the will of the people and is beginning to consider meaningful policies that will facilitate carbon emission reduction. While the Green New Deal was summarily dismissed from serious discussion in 2018, House Republicans have quietly put forward their own climate plan to reassure voters they are indeed concerned about the environment and a sustainable path forward. Political points are, after all, on the line this election year.

The plan specifics, many of which are in their infancy, are being coordinated by House Minority Leader Kevin McCarthy of California. Republicans Garret Graves of Louisiana, the top Republican on the Select Committee on the Climate Crisis, and Bruce Westerman of Arkansas were recently interviewed by Axios  after hosting a caucus-wide event on the topic Thursday on Capitol Hill.

Axios said “There’s not going to be an overall target to reduce emissions, which is likely to stoke skepticism from critics,” and indicated the plan will include targets for the following three areas: 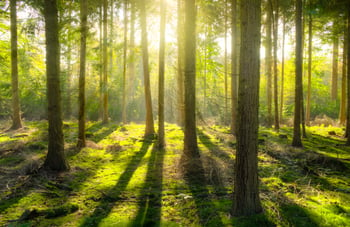 For his part, Rep. Westerman, the only forester in Congress, recently introduced the Trillion Trees Act, legislation that would plant 1 trillion trees globally by 2050 and incentivize the use of wood products as carbon sequestration devices.

“Trees are the ultimate carbon sequestration device,” Westerman said. “Every day, countless billions of plant cells are pulling carbon from the atmosphere and permanently storing it in wood. That’s why this legislation is so important. We’re taking proven science and turning it into practical solutions. Not only are we setting an ambitious goal of planting 1 trillion new trees by 2050, but we’re also reinvesting resources into managing forests and using wood products. Since wood continues storing carbon long after the tree is cut down and turned into furniture or building materials, there is no limit to how much carbon we can sequester.”

The ground is shifting, and a concerted climate change response is occurring in areas that seemed impenetrable just a few years ago. Corporate leaders across the global forest supply chain are in an excellent place to help frame the debate—and the policy—and part of the solution going forward.