How Much Carbon is Stored in US Forests?

Americans use an incredible amount of energy. While the US comprises just over 4% of global population, we consumed over 100 quadrillion British thermal units (Btu) in 2019, which was about 17% of total world primary energy consumption.

As a society powered by a robust economic engine, we primarily use energy for two purposes—transportation and electricity. We generate this energy through various means: solar, wind, hydropower, wave power and thermal (geothermal, nuclear and combustion of carbon chains). For thermal generation, we use a heat source to heat water to generate steam, which then powers turbines that generate electricity. Of these energy sources, only the combustion of carbon chains produces carbon emissions.

There are only two sources of carbon: below-ground, sequestered fossil carbon, and above-ground biological carbon. When fossil carbon (oil, coal, natural gas) is combusted, the carbon is emitted and added to the atmospheric carbon level, which is the primary source of greenhouse gases (GHG) that contribute to climate change. Currently, 65% of US electricity is generated using fossil carbon sources (coal and natural gas), and almost 100% of our transportation fuels are derived from fossil carbon.

When we burn (oxidize) one of these fuel sources, the process breaks the chemical bond between the carbon and oxygen atoms resulting in the release of thermal energy. Due to their chemical makeup, fossil fuels are more “efficient” in that there is more energy generated per unit of mass burned compared to other fuel sources such as biomass. However, we must remember that ALL of the fossil carbon is emitted as net carbon addition to the atmosphere (taking carbon that was sequestered below the ground and adding it into the atmosphere).

How do America’s forests help to “capture” this carbon?

Forest ecosystems make up the largest terrestrial carbon sink on Earth. Trees draw carbon dioxide from the atmosphere through a process called photosynthesis, and every part of a tree - trunks, branches, leaves, and roots - stores carbon. By weight, dried tree material is about 50% carbon. As part of the lifecycle of trees, they also release carbon dioxide back into the atmosphere when they decompose after death or burn during fires. At a landscape level, the US Forest Service notes that the amount of carbon in forests closely mirrors the natural cycle of tree growth and mortality. 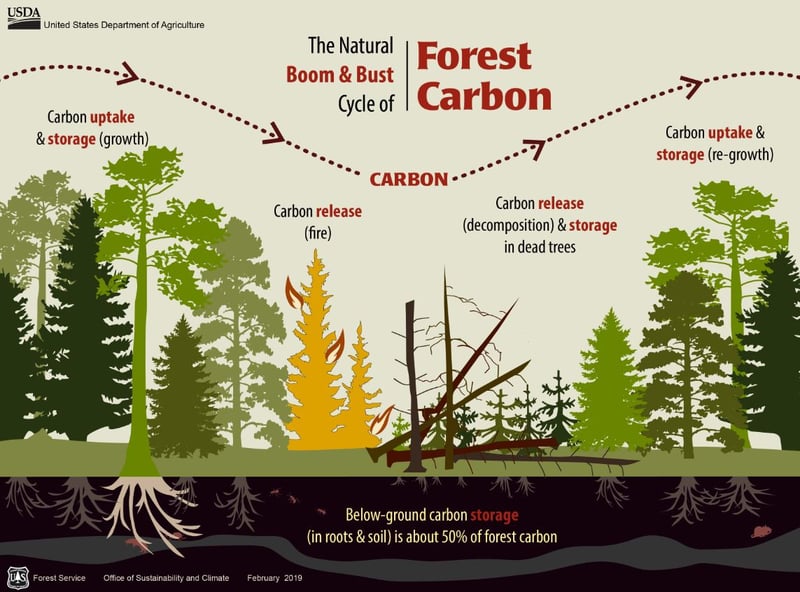 Per recent data published by the Proceedings of the National Academy of Sciences (PNAS), there are approximately 1.4 trillion live trees across all age/size classes on more than 632 million acres of forestland in the continental US.

How much carbon is stored in your state’s forests?

Our friends at Forest Resource Association (FRA) have developed new fact sheets that illustrate the role forestland plays in storing carbon at both the national and state levels. The fact sheets present the status and trends in forest carbon storage and sequestration using data from the USDA Forest Service Forest Inventory and Analysis program. As the climate change conversation continues to evolve, the fact sheets will prove to be a useful tool to illustrate the importance of maintaining working forestland to address the myriad challenges associated with climate change.

Keeping the economics of forest ownership strong, including markets for low-value wood, is a key component in preserving these forestlands. This incents landowners to manage their forests to promote health, resiliency and carbon sequestration while producing renewable products that meet our daily needs, support tens of thousands of American jobs, and keep forested lands forested.