The Forest Industry Should Embrace the Climate Change Conversation

With the benefit of hindsight, modern Americans often look back in horror at the way many of the rapidly expanding industries of the late 19th and early 20th centuries managed our natural resources. This includes some of the forest industry practices of the time, which were oftentimes a blight on the larger forest sector in many regions. Of course, hindsight is 20/20 and can never fully account for the complexities of the day.

Our memories are also quite short. Until plastics and polymers were adopted at scale, wood raw materials were used in many applications that would seem unimaginable today. Automobiles, airplanes, railcars, factory machinery, farm and industrial equipment, as well as most household items all contained significant amounts of wooden components. Not to mention the myriad solid wood and paper products, utility poles, bioenergy and chemical compounds all derived from wood that played a central role in America’s development.

In fact, it is fair to say that the booming expansion of the “American century” was driven in large part by the country’s vast forest resources—a fact that is often overlooked when seen through the lens of the modern environmental movement.

But times have changed. Paradigms and priorities have shifted, and we have entered not into a redux of the American century, but rather into a renewed global century that demands increased alignment between civic, corporate, and environmental goals and responsibilities that transcend borders.

Does this sea change present challenges for the increasingly connected global forest value chain? Absolutely. But I believe these challenges also present even greater opportunities. Chief among them is the ability to lead and contribute to the important discussions that will inform climate-related policy and solutions moving forward, because the climate conversation is here to stay.

How many industries can honestly say they have a solution for addressing climate change concerns? Not an obscure gadget, a pie-in-the-sky policy paper or an innovative, but unaffordable technology that simply won’t work at scale. I’m talking about a proven, tangible solution that is quite literally at the heart of what we do in the forest industry. 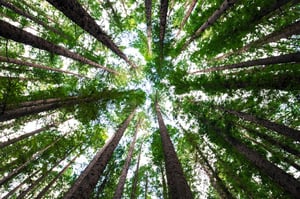 In February 2020, congressman Bruce Westerman (R-AR) stepped boldly into the climate change conversation when he introduced the Trillion Trees Act (HR 5859). The Act supports the U.N. initiative to plant one trillion trees globally by 2050 by planting more trees in the US, incentivizing the use of wood products to store carbon, improving carbon storage through active forest management, and directing the EPA to establish policies reflecting the carbon neutrality of biomass.

The Act also directs the Secretary of Agriculture to establish targets for increased wood growth on domestic forests, creates a reforestation task group that will advise the Secretary on wood growth targets, and adds carbon storage to the Healthy Forest Reserve Program allowing the USDA to assist private landowners in storing carbon through active forest management via easements, contracts and cost-share agreements.

While the proposed legislation still remains in the House, it represents the kind of visionary, solutions-based policy - which includes involvement from stakeholders throughout the value chain - that is so desperately needed in Washington.

More recently, entrepreneur and Tesla boss Elon Musk announced that he would personally donate $100 million to the “best” carbon capture technology that would be chosen through a competition sometime in the near future - and this is coming from just one corner of the private sector. (Our friends at NAFO were quick to make Elon an offer he couldn’t refuse!) 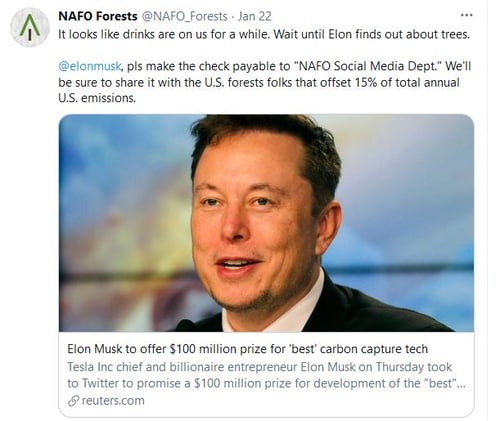 While it’s too early to gauge a consistent direction from the new administration in Washington, the arrow certainly seems to be pointing towards a renewed US commitment to pursuing clean energy solutions, global cooperation in mitigating risks associated with climate change, and hitting sustainability goals. On his very first day in office, President Biden made clear his intention to rejoin the Paris climate agreement; the pledge will culminate at the UN climate summit (COP26) in November 2021, where signatories will submit revised plans to meet their objectives.

More ambitiously, the Biden administration also announced its intention to make the US a 100% clean energy economy with net-zero emissions by 2050, as well as plans to decarbonize the entire US power sector by 2035. This would require the utilization of renewable energy solutions and technologies that simply do not exist at scale in 2020. However, if the administration is serious about an aggressive timeline in phasing out fossil energy, America’s vast forest resources will certainly play a role both during and after the transition.

As Forest2Market’s Stan Parton wrote last fall, state-wide bioenergy could meet the equivalent of 4-14% of California’s annual in-state electricity use, and the benefits to the state and local economy from supporting bioenergy would be significant:

Growing more trees, increasing forest volumes and, most importantly, keeping forestlands forested will be key components in mitigating climate change risks moving forward. As Forest2Market has demonstrated through the important work undertaken with our industry partners, working forests satisfy all of these requirements while imparting tremendous economic and environmental benefits: 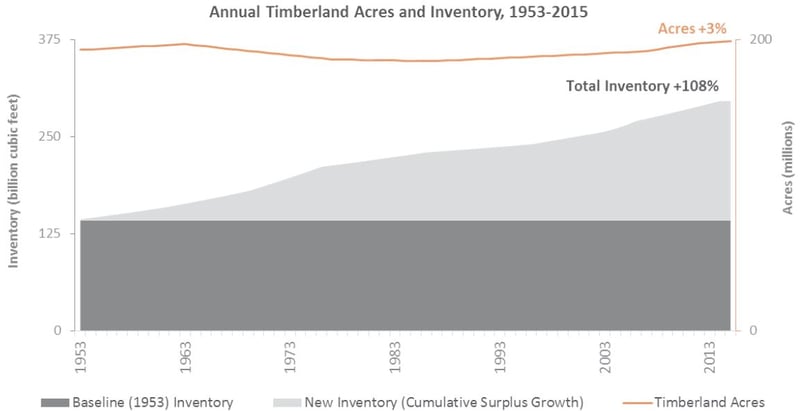 American forests are not in jeopardy from the forest products industry. Rather, they face the danger of underutilization in many regions—a topic of concern shared at all levels of the forest value chain, especially in the fire-prone Pacific Northwest.

Deforestation robs the environment of the natural resources needed to manage and sequester carbon from the atmosphere. As a result, scientists and governments are increasingly seeking out reciprocal methods for utilizing forest resources that meet both environmental and economic needs.

Obviously, keeping forestlands forested is integral to maintaining the cyclical nature of forests, which act as carbon sinks. But the wood that is harvested from working forests and subsequently used in a manufacturing process also imparts significant environmental benefits well after it is converted to other uses. Hundreds of products made from trees – lumber, OSB, plywood, cross-laminated timber (CLT), paper and furniture, to name a few – can sequester carbon for many years.

Just looking at one of these products, it’s easy to see the direct and indirect benefits of using real wood products in the construction sector. “The biggest advantage of a CLT-based building system over its traditional counterpart is the environmental benefits,” says Indroneil Ganguly, associate professor at the University of Washington School of Environmental and Forest Sciences. “We all know about the huge environmental impact of traditional mid to high-rise building systems. CLT’s role in CO2 emissions reduction is twofold. It displaces one of the most polluting materials (cement) and keeps the atmospheric carbon sequestered within the buildings for a long period.”

The ground is shifting, and a concerted climate change response is occurring in areas that seemed impenetrable just a few years ago. Corporate leaders across the global forest supply chain are in an excellent place to help frame the debate—and the policy—that will drive global climate change solutions going forward. Last November, 48 environmental, conservation and forest industry leaders helped to jumpstart the effort when they announced an agreement of principles on the important role sustainably managed forests and forest products can play in mitigating climate change. The executive signatories are united in a common vision to harness the power of the private forest sector to address climate change, and have outlined prudent policy principles to light the way.

“Why is any of this important?” asks Rep. Westerman of his Trillion Trees initiative. “Because this common, everyday occurrence [trees] is the most advanced carbon-capture device we have.”

As public and private entities continue to seek sustainable, global solutions for the 21st century and beyond, this is the story the forest products industry must tell with confidence.

Forest Management
Forest Industry Workforce: A Critical Component for a Climate Conscious Economy
In December, I presented to the Forest Resource Association’s Northeast Region on challenges the forest industry...
END_OF_DOCUMENT_TOKEN_TO_BE_REPLACED Forest Management
Sowing What You Reap: Replanting After a Timber Harvest
Advocacy for the myriad benefits of working forests is increasingly important, and Forest2Market strongly believes...
END_OF_DOCUMENT_TOKEN_TO_BE_REPLACED