Following a dismal performance in June, which saw southern yellow pine lumber prices sink to their lowest point since March 2016, the market is now showing signs of life. Forest2Market’s composite SYP lumber price for the week ending June 19 (week 29) was $376/MBF, a 6.2% increase from the previous week’s price of $354/MBF, but a 26.7% decrease from the same week in 2018. 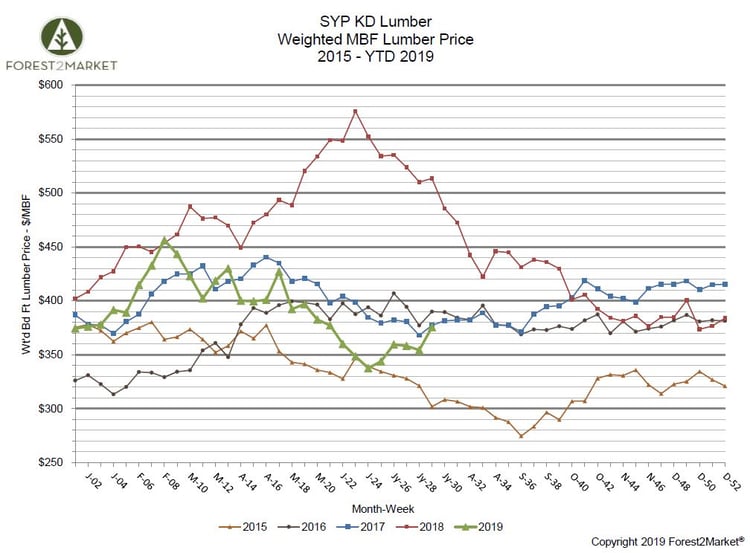 Slack demand thus far in 2019 has been responsible for the sputtering lumber market, as housing starts have failed to live up to expectations despite improved employment numbers and significantly lower interest rates. While single-family starts inched up last month, the trend hasn't been significant or sustained. As a result, many lumber producers in the US Pacific Northwest (PNW) and British Columbia (BC) are either curtailing their operations or closing them altogether.

As Keta Kosman recently noted via Madison’s Lumber Reporter, “One must congratulate the major sawmills in the Pacific Northwest for such quick response to badly softening prices. Without some serious reductions in supply, prices could have continued falling to below $300 mfbm. While it’s true that right now sales are slow, this is still better in the long run than accepting lower and lower prices to close a deal. Specifically because the latest data of U.S. housing starts, released last week for June, are encouraging. Single-family unit starts are up +3.5% compared to May. More importantly, builders and contractors are reporting a dangerous lack of skilled labour throughout Canada and the U.S. This means construction companies have building projects already planned but not the workers to complete.”

While most of the South is usually nearing drought conditions by this point in the summer, a deluge of rainfall struck the western region of the US South—a region already experiencing surging stumpage prices due to excessive precipitation during 1Q and 2Q2019—when Hurricane Barry made landfall in early July. Just the second named storm of the 2019 hurricane season, Barry’s impact was generally limited to some spotty flooding in pockets of Alabama, Arkansas, Louisiana and Mississippi. A sampling of some of the high rainfall totals via The Weather Channel include:

This additional precipitation will undoubtedly impede harvesting operations in the coming months, which will likely drive stumpage prices even higher in the western region of the South. Regional mill facilities may throttle back and/or shift capacity to operations in other parts of the South where applicable. However, there’s no getting around the disappointing homebuilding data and slack demand for lumber, which so far hasn’t provided much impetus for southern mills to aggressively chase the market. With the dog days of summer approaching and lumber prices now showing signs of life, is a late-season rally around the corner?

Lumber Prices
Softwood Lumber Prices Tumble 40%; Is Another Rally on the Horizon?
The volatile North American softwood lumber market continues to keep us all guessing as we enter mid-2Q2022. After...
END_OF_DOCUMENT_TOKEN_TO_BE_REPLACED

Log Markets
War in Ukraine Will Tighten Lumber Markets in Europe, China and The US
One immediate impact of the war in Ukraine and the sanctions by Western countries has been a dramatic reduction in...
END_OF_DOCUMENT_TOKEN_TO_BE_REPLACED