Beginning in 4Q2017, prices for domestic and export Douglas fir logs in the Pacific Northwest (PNW) rose steadily before they spiked in 2Q2018 to their highest levels since Forest2Market began reporting them via our Delivered Wood Raw Material Price Benchmark for Northwest US and Southwest Canada. Prices for hemlock / fir logs also followed the same trajectory, though not to the same price points.

These prices hit levels not seen for over twenty years, when the Spotted Owl crisis drastically reduced PNW harvests on federal timberlands by 90 percent. As we predicted last year, weighted average prices for Doug fir logs crested the $900/MBF mark and some regions even saw prices over $940/MBF.

North American lumber prices peaked in tandem with log prices in 2Q. Despite the speculation that prices would remain high due to supply constraints, export demand waned and housing starts sputtered through 2Q and 3Q. As a result, lumber prices began dropping progressively in June and have since returned to more historical norms, and log prices have started to follow suit.

In December 2017, the weighted average price for delivered domestic Doug fir logs was $833/MBF, which was 24% higher than a year earlier. Despite having surged to record high sustained prices through most of 2018, current delivered price has dropped to $797/MBF, which is 12% off its high of $904/MBF just five months ago. 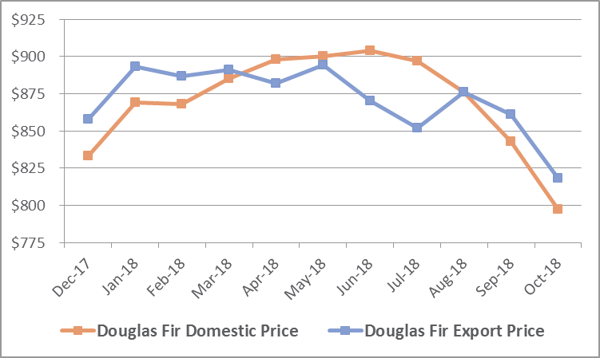 Doug fir export volumes continue a downward slide, dropping 3% since 2017 and 15% compared to 2015. Export prices followed a similar path to domestic prices throughout 2018. In December 2017, the weighted average price for export Doug fir logs was $858/MBF, which was 29% higher than a year earlier. Current delivered price is $818/MBF, which is 8% off its high of $894/MBF in May.

In December 2017, the weighted average price for delivered domestic Hem/Fir logs was $688/MBF, which was 34% higher than a year earlier. Despite having surged to record high prices through most of 2018, current delivered price has dropped to $661/MBF, which is 6% off its high of $704/MBF in February 2018. 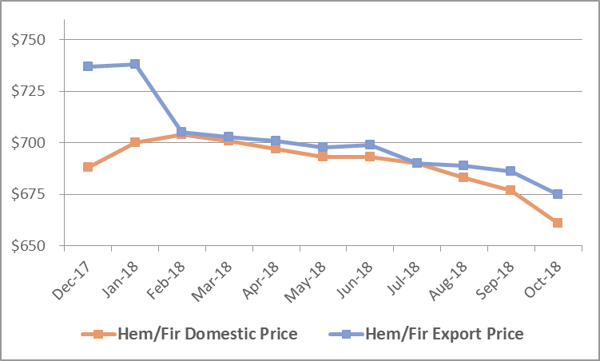 Hem/Fir exports, which were up slightly in 2016 due to Chinese demand, are also on a downward trend over the last few years; export volume is down 13% since 2017.  Export prices have displayed slightly less volatility than domestic prices since the beginning of 2018, however. In December 2017, the weighted average price for export Hem/Fir logs was $737/MBF, which was 26% higher than a year earlier. Current delivered price is $675/MBF, which is 9% off its high of high of $738/MBF in January 2018. 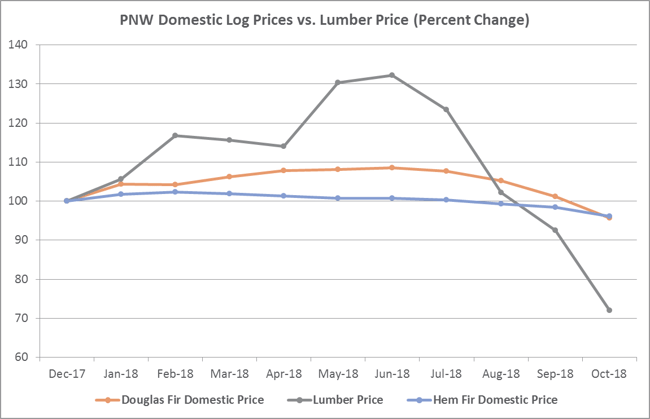 The chart illustrates that lumber prices have declined at a much greater rate than log prices on a percentage basis over the last year. From their 2018 highs to current price levels, percentage drops for each product include:

The combination of domestic and export competition for logs in the PNW earlier this year drove prices to high levels that have only recently begun to recede. A number of regional lumber mills maxed out their log purchases in order to increase inventories and beat what seemed to be a never-ending price run in 1H2018, thereby applying additional upward price pressure. As exports diminished and the housing market failed to live up to expectations, demand for logs in the PNW has plunged and prices have decreased as a result.

These price changes have impacted sawmill profitability. The decrease in lumber price and demand has driven many regional mills to reduce production—slashing operating hours, curtailing shifts or temporarily curtailing production altogether until markets improve—as log prices begin to return to the high side of normal. A continuation of this trend will likely result in more permanent adjustments, as we have already seen take place in Canada. As the market adjusts to the “new normal” that is the PNW log/lumber market, focusing on maximizing return-to-log will be critical for both mills and suppliers. Constant analysis of current market prices and market intelligence will be key to maintaining profitability in the future.

Timber Prices
How Has COVID-19 Impacted the PNW Forest Sector?
In the Pacific Northwest (PNW), the forest products industry has rebounded somewhat sooner than most believed it...
END_OF_DOCUMENT_TOKEN_TO_BE_REPLACED

Lumber Prices
Are Skyrocketing Lumber Prices a Sign of Things to Come?
If we’ve learned one thing about economic uncertainty during the COVID-19 pandemic, it’s that markets will always...
END_OF_DOCUMENT_TOKEN_TO_BE_REPLACED