Winter Precipitation Trends Across the US: Will Timber Prices be Impacted?

Winter weather challenges have the potential to suspend harvesting operations in every wood basket in North America. Prolonged wet weather in the South results in inoperable conditions for harvesting crews. Lack of snow and warm winter temperatures in the Northeast and Lake States also keep crews sidelined. While harvesters in the Pacific Northwest (PNW) can work pretty effectively through wet weather, hauling can become an issue.

Sound planning and inventory preparedness at the mill level are therefore key to surviving the winter months while mitigating risk exposure. How is winter weather shaping harvesting conditions in 1Q2021, and can it give us any indication into the directional price of timber in the near term?

The PNW began 2021 with some extreme weather. A “category 5 atmospheric river” began pummeling the region in mid-January, dumping incredible levels of precipitation in an area still reeling from last year’s devastating wildfires. During the worst of the ongoing storms, The Washington Post noted that every hour, “… up to 760 million gallons of liquid-equivalent atmospheric moisture were sweeping into the Pacific Northwest, fueling the heavy downpours and mountain snowfall in the region. That’s enough to fill more than 27,000 Olympic-size swimming pools per day.”

Snowpack levels in the mountains are running about average in most spots, although the atmospheric river event brought extreme levels of frozen precipitation to certain high-altitude areas as well. In mid-January, the cumulative snowfall on Washington’s Snoqualmie Pass was 236”; the 10-year average for snowfall at the mid-January mark is 156”.

Domestic log prices have softened about as much as they can, given the extent of the damage from last year’s fires. The rain and snow have slowed deliveries and supply has tightened - even for burned logs. The export market has really fallen off this year and that is unlikely to change in the near term. The China export market has nearly vanished, and most regional export companies remain shuttered due to lack of demand. Domestic and export log prices should temper based on increasing uncertainty in the global market, although tight supplies will ultimately dictate just where those prices will settle.

While much of the snowfall across the Northeast region has come later in the season, many areas were pummeled in the wake of an early February Nor’easter that spanned from DC to Maine. Areas in New Jersey, New York and Pennsylvania received more than 2’ of snowfall, and NYC’s Central Park got over 17” from the storm.

The situation has been similar in the Lake States. It took a bit longer in the season for some of the lake-effect snowbelts of Michigan to pick up significant snow, but early February brought the precipitation and prolonged intervals of arctic temperatures. 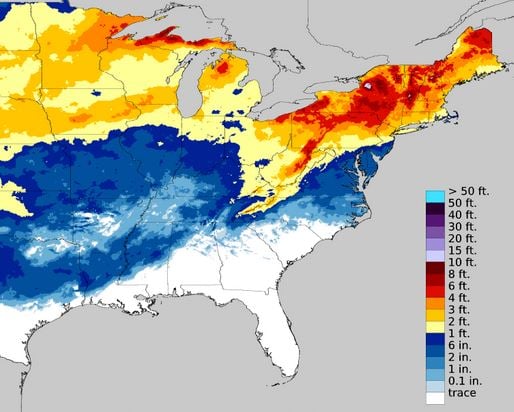 While such storms can temporarily delay road travel, these sustained periods of cold weather are ideal for timber harvesting crews across the Lake States and the Northeast, which should result in a steady supply in the near term. When analyzing days of inventory and price in SilvaStat360 over the last several months, regional mills seem to be in a good spot. Market onsite days of inventory have been marginally higher than in previous years, and price has been relatively flat. However, this dynamic is subject to change quickly and could cause some volatility in the coming weeks as mills seek to take advantage during the traditional seasonal stocking period.

The winter months are historically the wet season for much of the US South, which means vast tracts of timber may become inaccessible for long periods of time. Based on this trend, many mills begin building their inventories in mid-summer as procurement teams focus on the sandhills and upland tracts. While the forest value chain across the South has an expectation about tough conditions in the winter, several areas across the region have gotten more than could have bargained for. Isolated regions across Louisiana, Arkansas, North Carolina, and Virginia tallied record rainfall (and even snowfall in some spots) beginning late in 4Q2020 that persisted into the new year.

Across the US South, certain wood basins saw 70+ inch rainfall totals for 2020 with several areas cresting north of 80 inches – which is nearly double the 20-year average. (To put that number in perspective, 80 inches of rainfall represents the lower threshold for being classified as a rainforest.)

Despite the conditions, mills can only store so much inventory and procurement strategies can only prepare for so much. Similar to what we saw in early 2019, inventory on both sides of the supply chain has been running thin. Combined with strong demand for packaging material and dimensional lumber, several markets across the South have entered into a “feeding frenzy” for wood. Regional markets have experienced price increases as high as +88% for hardwood pulpwood stumpage and +54% for softwood pulpwood stumpage. 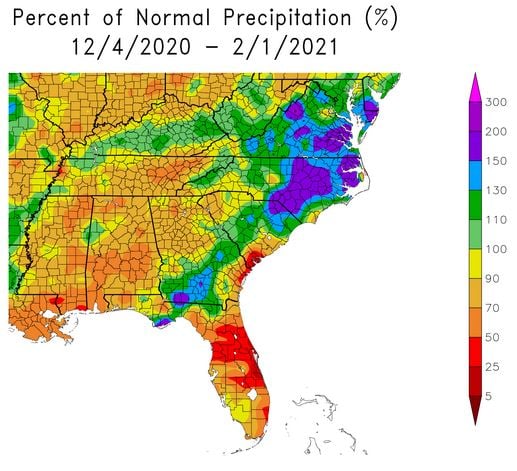 While we can’t control the weather or the broader economy, southern timber buyers and sellers can make better decisions by accessing the historical price data, trends and timber sales details available in Stumpage 360.

As noted above, the softening in PNW log markets that has recently occurred due to quality concerns and the growing supply of burned logs is largely over. Forest2Market data for December shows that prices are once again moving higher as supply tightens - even for burned logs. With improved markets, this will apply upward pressure on log prices during 1Q2021.

With several more weeks of potential winter weather, there is an increased supply side risk in Eastern North America in the near term. Inventories appear to be on the historical high side, which is good news for regional mills attempting to navigate some of the uncertainty surrounding the COVID-induced events of the last year.

It’s always hard to tell if the South has turned a corner by mid-February; in many places, the water is still standing in filled ditches and bubbling from the ground. The big question now lies in how long the wet conditions will persist. Once the ground becomes saturated, it doesn’t take much additional precipitation to shut down harvesting activities. Crews are still working on high ground, which will likely keep demand (and prices) high for hardwood in the coming weeks. However, as the days get longer and the temperatures begin to rise, the trees will begin pulling water once again and provide some relief to the saturated water table.

Timber Prices
Southern Timber Prices Continue to Trend Lower in 3Q2022
Following a 15-year peak in 1Q2022 and a sharp decline in prices in 2Q2022, the weighted average price for southern...
END_OF_DOCUMENT_TOKEN_TO_BE_REPLACED

Timber Prices
Halt in Russian Exports, Reduced Demand in China Contributed to a 20% Decline in Global Softwood Log Trade
Global trade of softwood logs plunged by 20% during the first half of 2022 year-over-year (YoY). Much of the decline...
END_OF_DOCUMENT_TOKEN_TO_BE_REPLACED

Timber Prices
Hurricane Ian Threatens Stressed Timber Supply Basin
Hurricane Ian is slated to build significant momentum in the coming days as it crosses the western side of Cuba and...
END_OF_DOCUMENT_TOKEN_TO_BE_REPLACED