Since mid-2019, wood chip and pulpwood prices in the Pacific Northwest (PNW) have largely demonstrated a decreasing pattern, reflecting the healthy supply that has been available to the market over the last few years. However, that pattern reversed course abruptly in 4Q2021 and prices have been headed higher ever since. Regional delivered prices for these forest products are now higher than they have been in three years.

As basic economic theory commands, the equilibrium between supply and demand ultimately decides price and when one of these drivers falls out of balance, price will respond accordingly. In the case of wood chips, the PNW is generally more sensitive to supply side drivers for two primary reasons:

While lumber manufacturers ramped up production to take advantage of record prices for finished softwood lumber in 2021, pulp and paper production in the PNW remained flat. This led to unchanged chip demand for most of the year while supply increased, and prices largely reflected this softness through 3Q2021. However, prices surged in 4Q and they continue to trend higher as we approach the end of 1Q2022. Conifer primary and residual chip delivered prices are up 22% and 27% year-over-year (YoY), respectively. 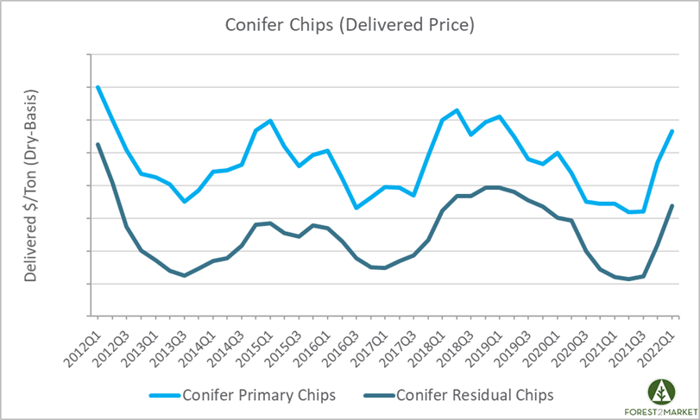 Regional chip demand is so strong that the sharp price spike is also bleeding into the pulpwood market. Prices for conifer pulpwood are now up 24%, and prices for hardwood pulpwood are up 10% YoY. 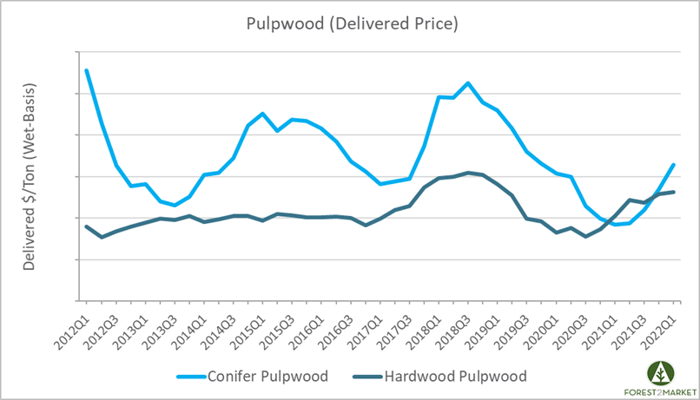 As noted above, western sawmills are cutting boards as fast as they can to keep pace with strong demand while taking advantage of high lumber prices. But based on pinched timber supplies, the western sawlog market has also soared in recent months. Domestic Douglas fir log prices are the highest they have been since Forest2Market began reporting market prices in 2008, and Hem/fir prices have followed a similar trend.

There are a few supply- and demand-side market developments that have coincided to cause the current price spike:

All of these factors have combined to create a shortage of chip availability for PNW consumers. To stress matters even further, the limited log supply and extremely tight labor market have left sawmills in a difficult spot; they simply don’t have the capacity to increase production even if they wanted to.

Even though it's still ongoing, fire salvage is on the decline and there isn't much timber left to profitably harvest at this point. The transition back to harvesting green logs will improve prospects for small log availability, however, the limitations of the trucking shortage and competition for these logs will remain.

This combination of events will keep upward price pressure on wood chips and pulpwood in the PNW for the foreseeable future. 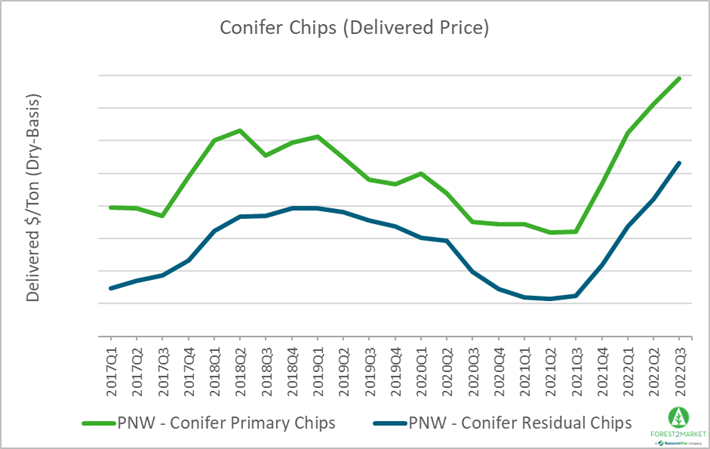 Timber Prices
Halt in Russian Exports, Reduced Demand in China Contributed to a 20% Decline in Global Softwood Log Trade
Global trade of softwood logs plunged by 20% during the first half of 2022 year-over-year (YoY). Much of the decline...
END_OF_DOCUMENT_TOKEN_TO_BE_REPLACED 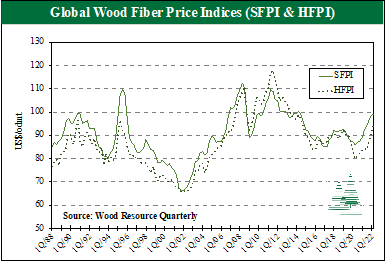