Lumber prices have plummeted since climbing to new highs in late May, and the decline seems to have breathed new life into a housing sector plagued by exorbitant labor and materials costs 4Q2020. New housing starts inched up in May, and fresh June data shows the trend has picked up momentum. However, new housing authorizations for future construction dropped to an eight-month low. 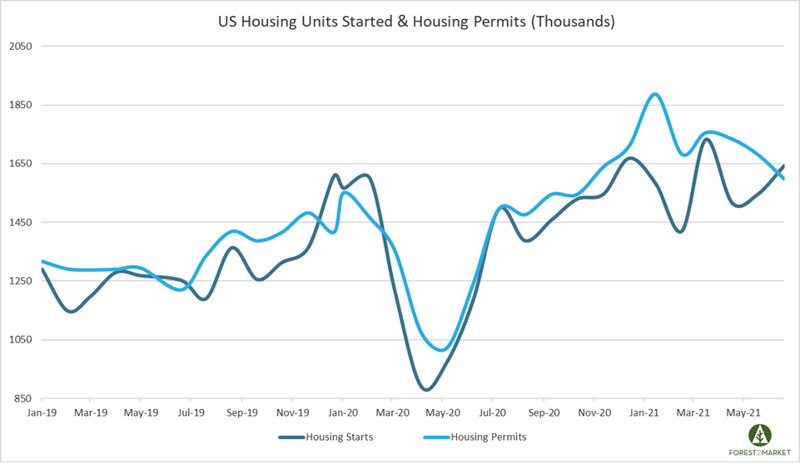 "Widespread anecdotal reports point to builders delaying or turning down orders to allow shortages to ease and to catch up to a growing construction backlog," said Mark Palim, deputy chief economist at Fannie Mae.

The 30-year fixed mortgage rate inched up in June from 2.96 to 2.98, and the NAHB/Wells Fargo Housing Market Index (HMI) ticked down from 81 last month to 80 in mid-July.

According to fresh housing market insights published in our most recent issue of the Economic Outlook, if analysts agree on anything about housing’s future trajectory, it is that “right now, we view the shortage of housing inventory as the primary limiting factor for home sales as we start looking forward into the second half of the year,” said Keller Williams’ Ruben Gonzalez. Gonzales has a point insofar as while new-home inventory has been gradually trending higher during the past year (hitting 5.1 months of sales in May), existing-home inventory has only now begun showing signs of crawling out of the trough (to 2.5 months in May); historical averages for both categories are around six months of sales.

Now that lumber prices appear to be succumbing to gravity, some of the supply-chain related pressures builders were facing may be relieved, which could allow them to quicken the pace of operations. Analyst Robert Hughes postulates the downward trend of single-family starts may indicate the stream of people leaving cities is slowing from its pandemic-fueled surge, which if true should alleviate some of the demand for lower-density housing, Moreover, at the same time prospective homebuyers are being hit with rising home prices, rocketing rents are also threatening to lock them out of the market. The Case-Shiller 20-city price index hit 14.9% in April, its highest growth rate since December 2005.

Apartment List’s National Rent Report for July indicated rental prices have grown a “staggering” 9.2% since January—which is three or more times the typical rate of growth during those months of the year.

In light of those headwinds, it is not surprising mortgage applications for purchase have fallen at the end of June to levels last seen in May 2020—even as the average loan size has increased. This is another indication “first-time homebuyers, who typically get smaller loans, are likely getting squeezed out of the market due to the lack of entry-level homes for sale,” said Mortgage Bankers Association’s Mike Fratantoni.

Lately, another factor allegedly affecting home prices has grabbed headlines: private equity firms, such as Blackrock, purchasing homes as investments. In April, the Wall Street Journal first noted the growing presence of private equity in the residential market; since that time other media outlets have tried to “contextualize” private equity’s activity in residential housing markets. While clearly of sufficient scale to attract attention in national media, our view is that—although such activity has an impact—it is localized rather than national and is consistent with a business strategy aimed at acquiring “shelter” assets in geographies exhibiting significant population influxes and/or growth.

The risk in local markets lies in catapulting shelter costs above the reach of wage earners in those markets and so adversely affecting labor markets. For example, we are aware of cases in which individuals have received job offers but had to decline them when unable to locate affordable housing. To the degree such occurrences become commonplace, they will represent yet another obstacle to normalizing the economy.