It’s been a long, strange year, to be sure. While my annual predictions for the forest industry in 2020 didn’t miss the mark in every category, I couldn’t possibly have anticipated the ever-unfolding developments associated with the COVID-19 pandemic.

Just imagine, for a moment, your reaction if I posed the following predictions this time last year:

You would likely laugh out loud (with good reason), and I would expect my phone to ring off the hook with calls from concerned colleagues.

Yet, this has been our strange, shared reality for the last 10 months.

In the forest products industry specifically, the run on tissue and towel products caught the supply chain off guard in April, and TP shortages became front-page news. But this year’s peculiarity is perhaps best represented by the meteoric rise in softwood lumber prices to all-time highs (by huge margins) against all odds.

In fact, Forest2Market’s southern yellow pine price composite demonstrated so much volatility in 2020 that we had to make changes to our publication template. $1 per board foot (MBF) seemed like a stretch but prices tested that level in September, and the trend hasn’t been exclusively unique to southern lumber. Prices for popular western lumber products also set new records as well: Benchmark Hem/Fir products reached over $1,000/MBF and Douglas fir products were over $920/MBF during the same time period. 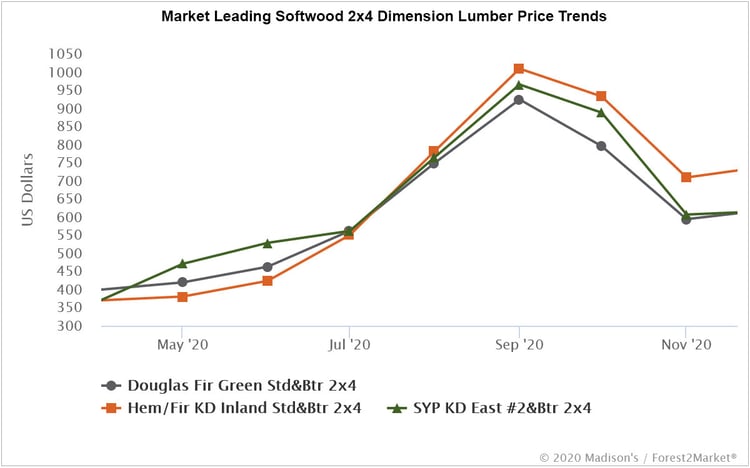 How Did We Get There?

As I wrote in mid-summer, three primary factors converged in the immediate wake of the first wave of pandemic lockdowns to drive lumber prices to new highs:

The homebuilding sector tanked at the onset of the COVID-19 pandemic. Housing starts were down 30% in April to a seasonally adjusted annual rate (SAAR) of 891,000 units—well below the historical average of 1.5 million. However, total starts gained ground nearly every month since early summer and, per the latest data in October are currently at a SAAR of 1.530 million units. “The pace of single-family starts in October was the highest production rate since the spring of 2007,” wrote NAHB chief economist Robert Dietz.

By the end of 1Q2020, lumber manufacturers had to do their best to match production to what everyone believed would be a huge shift in demand, and many producers closed or curtailed their operations as a response. By the time mid-April rolled around and US lumber production had slowed to a crawl, Canadian lumber shipments to the US—which make up a significant chunk of US supply—were also down by nearly 20%. This combination resulted in a tremendous supply gap in the market, while demand from the new housing and R&R segments remained surprisingly strong.

Since North American lumber market prices are so influenced by wholesalers operating within the confines of commodity-based futures contracts, they are more prone to the symptoms of speculation. The situation that developed early in 2020 created a sense of anxiety that resulted in panic buying and the emergence of a speculative market bubble that drove prices ever higher, and lumber manufacturers were forced to chase a moving target. By the time the supply chain corrected itself at the end of September, lumber prices dropped even faster than they had risen.

Where Are We Now?

The Wall Street Journal recently noted that “Lumber prices are making an unusual late-season climb, thanks to builder-friendly autumn weather and suppliers stocking up for what they expect to be another big year for home construction.”

Indeed, demand for single-family housing has increased so rapidly in recent months—fueled by low interest rates and a desire for more space—that there is now a gap between sales and home construction not seen since the housing bust that began in 2007. Census Bureau estimates and NAHB surveys indicate builders are selling a greater number of homes that have not even begun construction; in October alone, homebuilders committed to 385,000 units (SAAR) for which they had not yet broken ground. Mortgage rates are at all-time lows and, while we are still a long way from returning to pre-pandemic levels, employment numbers are holding steady.

This should contribute to new housing starts and lead to stable demand for lumber and panels in the short to medium term. Our most recent data confirms the trend as southern yellow pine lumber prices have turned markedly higher in recent weeks. Forest2Market’s SYP lumber composite price for the week ending December 18 (week 51) was $675/MBF, a 15.8% increase from the previous week’s price of $583/MBF, and an astounding 98% increase over the same week in 2019. 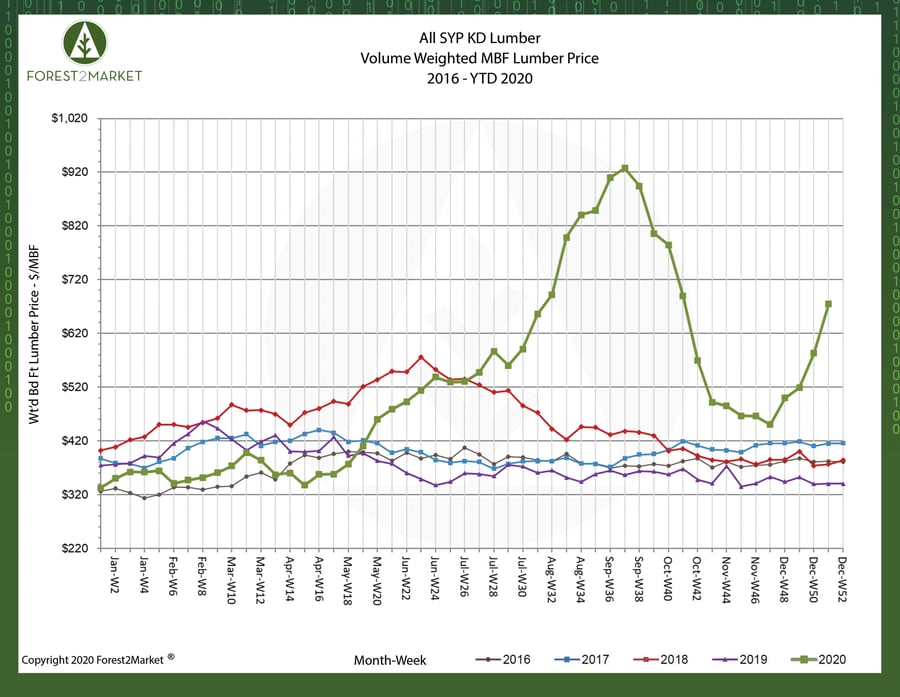 Where Are We Going?

In reaction to October’s housing starts data, Walt Breitinger of Paragon Investments wrote, “The pandemic has exacerbated the problems with city living accompanied by crime, high taxes, pollution, and congestion. Strong housing starts were announced Wednesday while single family home sales, announced Thursday, exploded to a 14-year high. Much of the housing demand was attributed to the rise in electronic learning, remote meetings, and home offices in suburbs while the 40-year low in mortgage rates continues to help affordability.”

Availability of homes for sale remains incredibly tight on a months-of-sales basis. Inventory for sale is now on par with, or at, all-time lows (new homes: 3.3 months; resales: 2.5 months).

Why are these developments important?

As we have frequently mentioned in past posts, the millennial cohort is more numerous than the Baby Boomer generation. While millennials got a slower start on homeownership because of college debt and graduating into an uncertain job market, they are gradually becoming more active in the housing sphere; in fact, National Association of Realtors data indicates millennials’ share of mortgages recently surpassed 50% for the first time.

Looking forward, “Every year for the next decade, tens of millions of millennials will hit home-buying age,” market analyst Stephen McBride has predicted. “In other words, a whole generation of homebuyers will soon flood the market. At a time when there is a massive shortage of homes in America.”

Some setbacks will be inevitable along the way - a high probability of more lockdowns being imposed could adversely impact employment and the broader economy in the coming months. However, new demand for housing is being driven by 1) freedom for many to work remotely and escape the tethers of high-cost, high-density cities, and 2) America’s largest generation entering homeownership en masse, which will require new homebuilding and enormous amounts of North American lumber.

In light of these developments that will drive stable demand, softwood lumber prices should reflect this relative strength in the near-term. For the forest products industry, this is a bright spot we can all focus on as we put 2020 in the rearview mirror and navigate with cautious optimism into 2021.

Lumber Prices
WRI Market Insights: Global Softwood Lumber Markets
Global trade of softwood lumber fell about 10% in the first half of 2022 compared to the same period in 2021. Most of...
END_OF_DOCUMENT_TOKEN_TO_BE_REPLACED

Lumber Prices
Southern Lumber Prices Continue to Inch Down
After jumping 12% in August due in large part to strong demand from the multi-family construction sector, US housing...
END_OF_DOCUMENT_TOKEN_TO_BE_REPLACED