US Hardwood Industry Reeling from Tariffs, Trade War with China

Much has been written about the current trade/tariff situation and the evolving impacts it is having on US markets. We have covered the highlights of these development over the last year—especially as they relate to the global log and lumber trade—and the implications concerning US housing starts and the larger housing market. While softwood logs and lumber typically dominate the conversation due to their scope in new construction markets, hardwood log and lumber exports have taken a real beating over the last year and the dramatic shift in fiber demand is affecting the entire supply chain—particularly in the Appalachian and Northeastern regions.

In the construction and wood products manufacturing segments, hardwood logs and lumber are typically used for higher-priced materials like wood flooring and end products like furniture, cabinets and doors. Over the last several years, China has been the largest importer of American hardwoods by a longshot. In fact, prior to the first round of tariffs that were announced in mid-2018, US hardwood exports to China were approximately $2 billion—nearly 50 percent of the total US hardwood grade lumber produced.

Per a recent CNBC article, “China actually saved the American red oak business in recent years. As it fell out of fashion in the U.S., the industry marketed it hard in China, and now it’s the favorite there. Unfortunately the Chinese are now going elsewhere to find it.”

It would be an understatement to say that Chinese tariffs on American hardwood products, which range in severity, have dampened shipments overseas. However, some species have been impacted more than others per research from the Hardwood Export Council that was recently cited by the Hardwood Federation and published by the Farm Bureau. 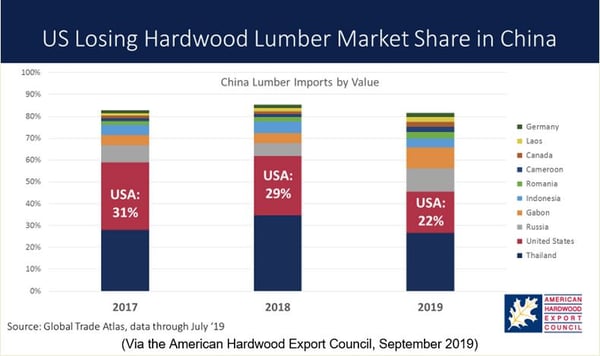 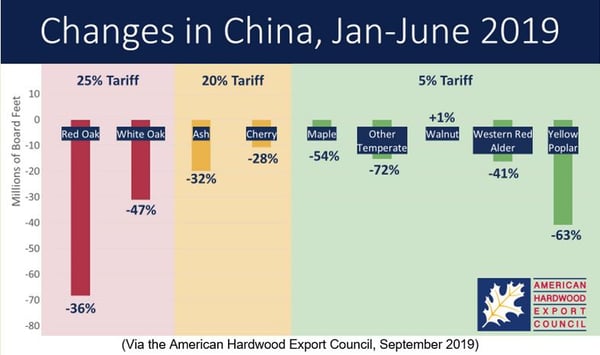 To put the numbers in perspective, since July 2018, hardwood lumber exports to China are down $615 million compared to the previous year, which is an average of $154 million per quarter. Put another way, Tripp Pryor, international program manager at the Hardwood Export Council recently stated that "When China slapped a 25 percent tariff rate on red oak logs and lumber, it cratered the price producers can get for red oak. That's a huge chunk of demand that's disappeared. This drop is larger than if all of Europe and all of Southeast Asia just quit buying U.S. hardwoods overnight."

As the Hardwood Review  noted in mid-summer, “’Business is terrible,’” said one sawmill, while another said, “’I don’t think I’ve ever felt the industry in as deep a funk as it is in now.’” Wet weather has brought log supply problems back to the northern parts of the Appalachian Region, and a Pennsylvania mill said, “’Landowners are now giving extensions on purchasing contracts for timber bought a year ago to try to keep mills from backing out given what has happened to lumber prices.’”

China has traditionally been a large purchaser of American-grown hardwood species like oak and cherry. Since domestic demand for these products has waned, the Chinese export market has been a great outlet for hardwood log and lumber producers in the Lake States and Eastern US.

When analyzing the steep decline in hardwood exports by species in the above chart, it is clear that the lack of demand for products that typically command a higher price, such as Cherry, are forcing the market into other products. In this case, maple and red oak are less-expensive options. However, the 25% tariff on American red oak is impacting exports of that product to China (-36%), which is also a very high-volume product. The 5% tariff on maple is less severe, but exports are down 54%, nonetheless. This combination, for example, has resulted in an oversupply of red oak on the domestic market, which has driven prices down.

“The American hardwood industry is facing a watershed moment in China. As political and commercial ties between our two countries continue to deteriorate, our industry is caught in the middle of a fight with a country who has been our largest market for a decade,” wrote Pryor in August. “The real long-term danger here is that we are losing market share that will not easily be won back.”

Participants in the global wood supply chain are accustomed to the reality of fluctuating prices. However, the long-term danger that Pryor references is, in my opinion, the most concerning for the US hardwood industry at this moment. Recapturing market share is difficult and time consuming—especially with a trade partner like China, who is now accessing more hardwood products from areas that are geographically more convenient.

Lumber Prices
SYP Lumber Prices Stabilize; Is More Volatility Around the Corner?
By late June, the price for finished southern yellow pine (SYP) lumber had tumbled 59% from its 2022 high mark of...
END_OF_DOCUMENT_TOKEN_TO_BE_REPLACED