As the Wall Street Journal recently reported, the ongoing war in Ukraine has pinched trade flows of the increasingly valuable supply of industrial wood pellets from Russia, Belarus and Ukraine, which have been used to co-fire power generation plants throughout Western Europe over the last decade. Demand has put upward price pressure on pellets originating in the US South, as the future of fossil energy supplies in Europe remain uncertain.

The WSJ notes that “U.S. export volume, which has climbed steadily over the past decade, is running ahead of last year, when a record of more than 7.4 million metric tons of U.S. wood pellets were sold abroad, according to the Foreign Agricultural Service. The average price before insurance and shipping costs has risen to nearly $170 a metric ton, from around $140 last year.” 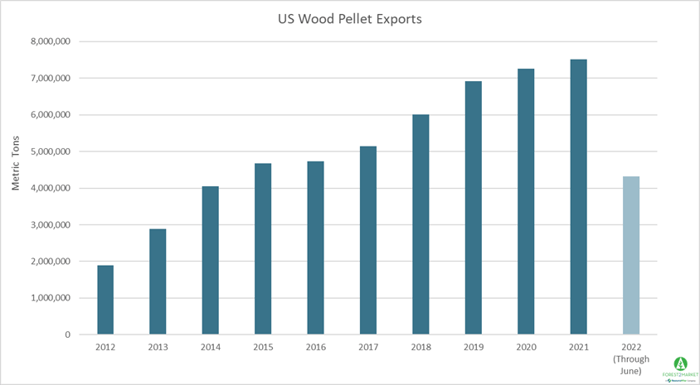 Further illustrating the jump in both monthly demand and export prices, Biomass Magazine wrote earlier in August: “The value of U.S. wood pellet exports reached $141.32 million in June, up from both $131.78 million the previous month and $82.97 million in June of last year. Total U.S. wood pellet exports for the first half of 2022 reached 4.32 million metric tons at a value of $731.2 million, compared to 3.58 million metric tons exported during the same period of last year at a value of $514.83 million.”

To help meet this growing demand, Enviva—the largest export wood pellet producer in the US—announced plans earlier in the year to double its wood pellet production capacity over the next five years, from 6.2 million metric tons per year (MTPY) to approximately 13 million MTPY. While the company’s core business continues to grow in foreign markets, it has also signed a memorandum of understanding (MOU) with its first US-based customer who plans to use woody biomass as a feedstock supplied by Enviva to manufacture low-carbon transportation fuels, including sustainable aviation fuel (SAF).

Biomass as a feedstock has been under the magnifying glass in recent months, as the European Parliament can’t make up its mind about the renewable nature of wood fiber (hint: when managed sustainably, forest resources are 100% renewable). Just three months ago, biomass detractors in the EU launched fresh criticisms about utilizing wood pellets as a temporary energy source despite Ursula Von der Leyen’s (head of the EU's executive branch) recent statement that a decision to embargo most Russian oil imports will "effectively cut around 90% of oil imports from Russia to the EU by the end of the year."

“Analysts say changes in government policies are one of the biggest threats to Enviva and others in the pellet business. The European Parliament’s environmental committee in May voted to stop encouraging the burning of woody biomass by eliminating its eligibility for renewable-power subsidies and changing how emissions are counted, but the full parliament would need to sign on to change the rules,” WSJ notes.

However, “Particularly amid the war and resulting natural-gas supply crisis, this seems like the worst possible time to change policy on bioenergy,” wrote Raymond James analysts. “We doubt that the committee will get its way, at least anytime soon.”

We couldn’t agree more. Renewable forest resources should be a natural option for parts of the EU as a sustainable and cost-stable feedstock, which would largely act as a “bridge” fuel until more efficient and less expensive forms of renewable energy avail themselves. And contrary to some of the prevailing—and wildly misleading—narratives regarding the nature of biomass feedstocks, utilizing low-value forest resources for the production of wood pellets is actually beneficial for long-term forest sustainability.

This is because timber and the land timber occupy are economic assets. As in any market, when there is strong demand, owners actively manage their assets to maximize economic return. In this case, timberland owners manage their forests to maximize tree growth – especially the growth of the highest value product from the forest (sawtimber) – which increases their return on investment. Forest products and bioenergy manufacturers then use the raw materials that they purchase to the fullest extent possible, including the utilization of low-vigor, low-value trees and residual products for energy production where markets exist.

Managing working forests for blended outcomes makes both economic and environmental sense. In the case of woody biomass, North Carolina State University's Dr. Rajan Parajuli wrote last year that “… bioenergy from wood chips is found the least expensive and the least greenhouse gas-intensive with the lowest abatement cost among nine agriculture and forestry feedstocks, which highlighted the relevance and better prospects of woody biomass to substitute coal at the power plant.”

The Economics of Wood Consumption

Basic economics and industry best practices ensure that harvested trees are used to maximize their value. Consider the price differential between pine sawtimber and pulpwood in the US South, where most industrial wood pellets are manufactured: In 2Q2022, the Southwide volume weighted average price (stumpage) for pine sawtimber was roughly 108% higher than the price for pine pulpwood, which is one forest raw material used to manufacture wood pellets. 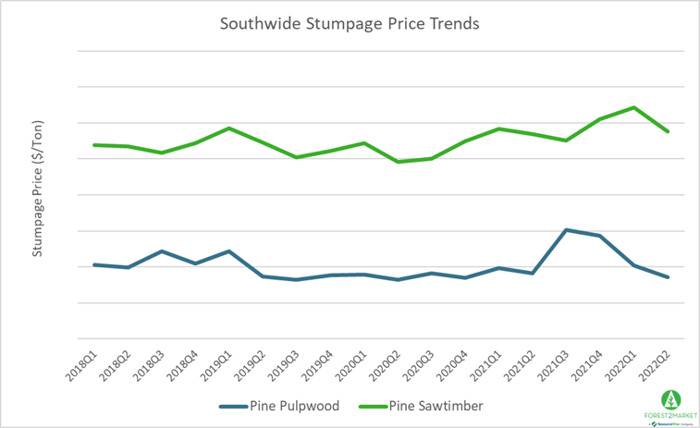 Timberland owners will not harvest all of their timber as small trees at a significantly lower price when they can harvest mature trees for a much higher return. In addition to the higher value for larger logs, the increased growth of the trees in the intervening years also results in several additional tons of sawtimber that can be sold at the higher price. Economically, it makes no sense to do otherwise.

Forest biomass / wood pellet production is a key component in helping to preserve this proven correlation between environmental and economic interests of the forest. It is this symbiotic relationship that, most importantly, provides blended outcomes in the form of economic benefits to the timberland owner, and environmental benefits to all of us.

Wood Pellets
Russia's War is Changing Wood Pellet Market Dynamics in Europe
The international trade of wood pellets has increased yearly for over ten years thanks to growing demand in Europe and...
END_OF_DOCUMENT_TOKEN_TO_BE_REPLACED