Forest management is a long-term activity and investment; it takes years of patience to reap the rewards of the effort that is sown both monetarily and materially. The market for forest products, on the other hand, operates in a completely different dynamic, as the variables that drive these markets can develop very quickly and are oftentimes volatile. Global demand for wood-based products can fluctuate wildly even from season to season.

Just a year ago, Forest2Market do Brasil published an article analyzing plywood and lumber exports in which we highlighted the positive market momentum and the factors that were driving the increase in exports. In May 2019, a new analysis by the Forest2Market do Brasil team focused on pine plywood exports that highlighted a 31% drop in export volume in March and April 2019. This decrease was driven in part by extreme weather patterns during the peak construction season in the United States, which led to reduced demand for building products across the board. We also predicted that the situation would likely change in 3Q2018 and construction activity would begin to rebound.

When August housing starts information was released just two weeks ago, the data illustrated that the US construction market (the major driver of Brazilian wood products exports) had its best monthly performance since 2007. While it’s too early to tell if this spike in building activity represents the beginning of a late-season construction run, the hope is that housing starts will maintain growth through the remainder of 2019.

Can this hope also carry over to pine plantation owners and lumber and plywood producers in Brazil?

The current state of Brazil’s pine plywood export market has concerned the country’s industry. While the export trend between 2011 and 2018 demonstrated steady growth, Brazil would have to ship more than 105,000 tons per month by the end of the year to reach the total volume exported in 2018. Over the last three months (June, July and August), the monthly average export volume was 82,000 tons as shown in figure 1. 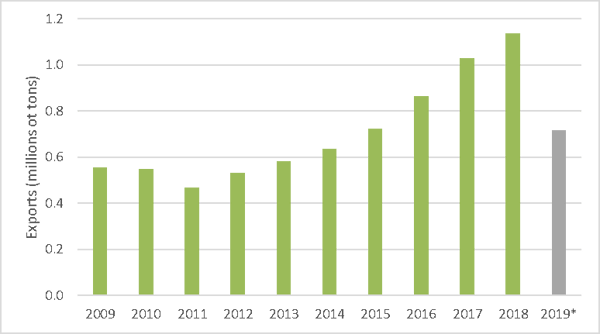 * Through August
Source: Comex, adapted by Forest2Market do Brasil

After an excellent May, pine plywood exports between June and August were down 21% compared to the same period in 2018, as shown in figure 2. Expectations for the remainder of 2019 are bleak and could signal the first yearly decline since 2011. 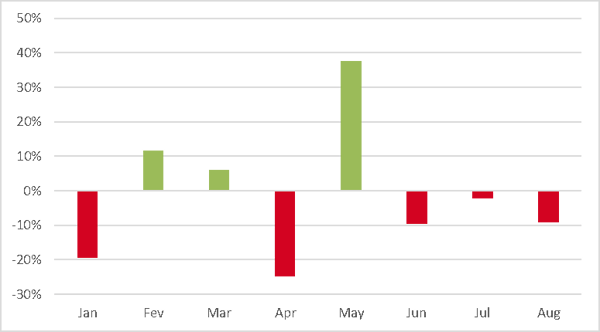 The situation is very much the same for pine lumber exports. To reach the volume exported in 2018, Brazilian producers would have to ship more than 97,000 tons per month by the end of the year; the monthly average over the last three months was 94,000 tons as shown in figure 3. 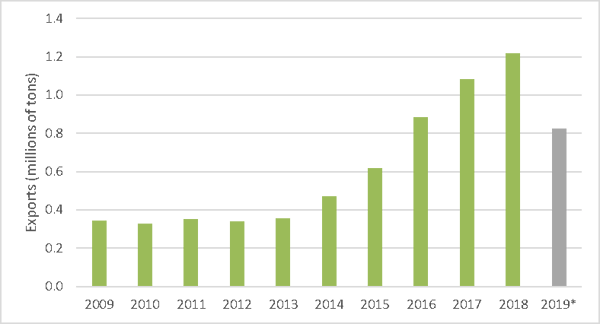 * Through August
Source: Comex, adapted by Forest2Market do Brasil

While lumber exports in 2019 have been steady, the pace has been falling since June. In August, for example, Brazilian pine lumber exports were down 20% as shown in figure 4. 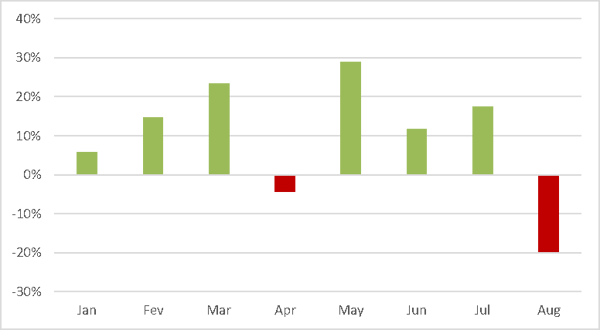 While US demand is a major driver of pine exports from Brazil, market challenges in other global destinations will also affect Brazilian exports in the near term. Since mid-2018, millions of cubic meters of lumber and logs from central European countries have flooded the global market as a result of salvage harvests due to severe weather occurrences and pest/disease infestations. By August 2019, Germany—one of the countries heavily impacted by these harvests—had exported over 1.3 million tons of conifer logs to China (Brazil exported 19,000 tons of pine logs in 2018).

The phenomenon observed in Europe seems to have gradually increased in recent years. While it is impossible to predict precisely how long this salvaged wood will affect supply and demand dynamics in the global market, our best estimate is 2-3 years.

Meanwhile, in the United States...

A new concern for Brazilian producers and exporters recently emerged in the form of an international lawsuit. A group of ten US plywood producers has filed a lawsuit alleging that plywood manufactured in Brazil is defective due to “a widespread failure in quality control.” The suit also alleges that Brazil has an unfair pricing advantage, which has caused many US producers to operate at a loss since September 2017.

Defendants of the lawsuit include agencies that certified compliance of the Brazilian plywood (to the American standard PS 1-09) and dozens of Brazilian companies, all from the states of Paraná and Santa Catarina. The plaintiffs claim that Brazilian plywood shipped to the United States failed between 75% and 100% of the time it was tested during 2018 and 2019.

The certifiers and some of the manufacturers involved have argued that Brazil has been exporting high-quality plywood to the US for nearly 20 years, and the claims are simply untrue. However, even if the lawsuit goes nowhere, the negative publicity and perception could damage the reputation of the Brazilian plywood industry after it has experienced seven years of significant and demonstrable growth. 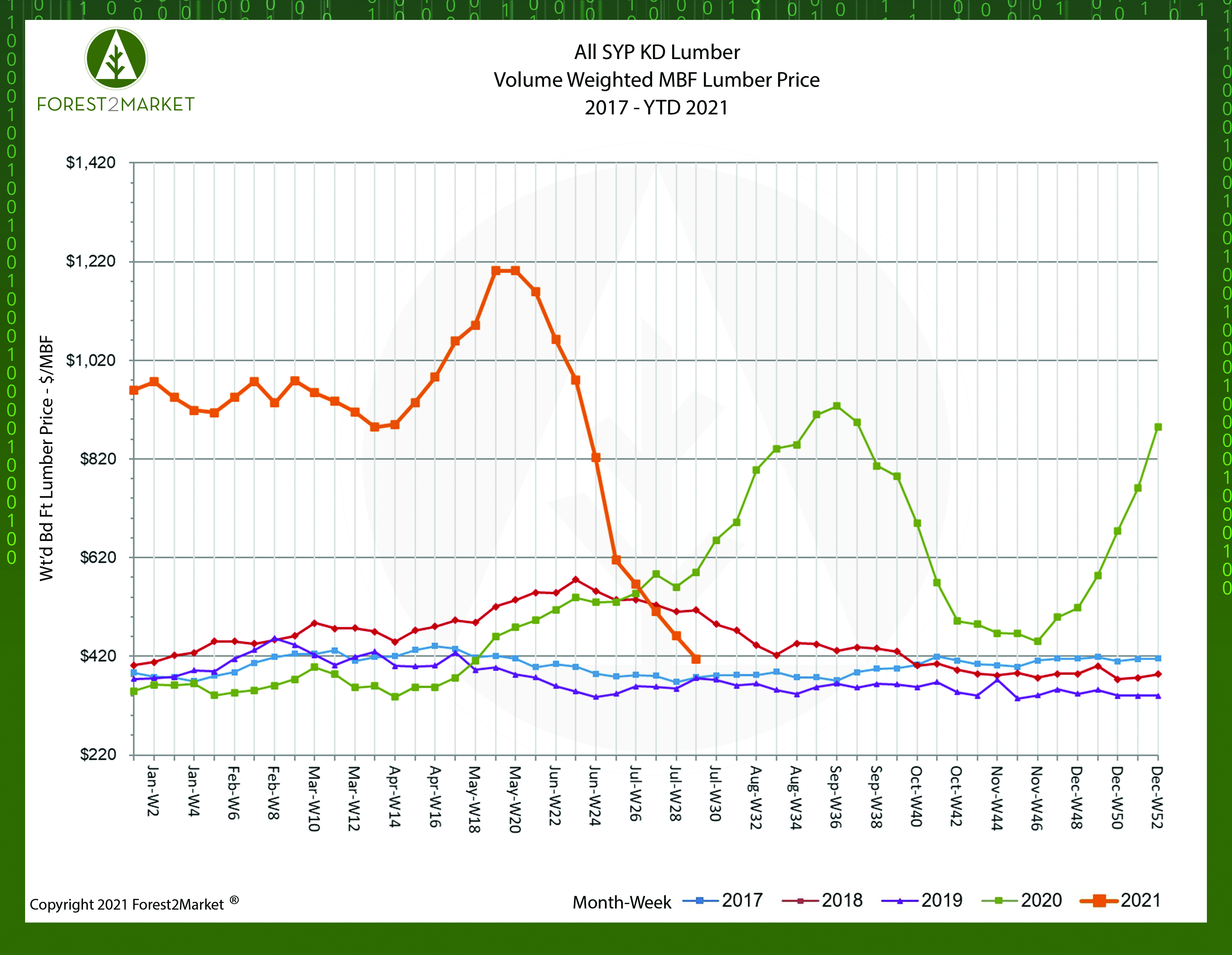 Lumber Prices
Have Lumber Prices Found a Floor?
Southern yellow pine (SYP) lumber prices have crashed over the course of the last nine consecutive weeks to the...
END_OF_DOCUMENT_TOKEN_TO_BE_REPLACED 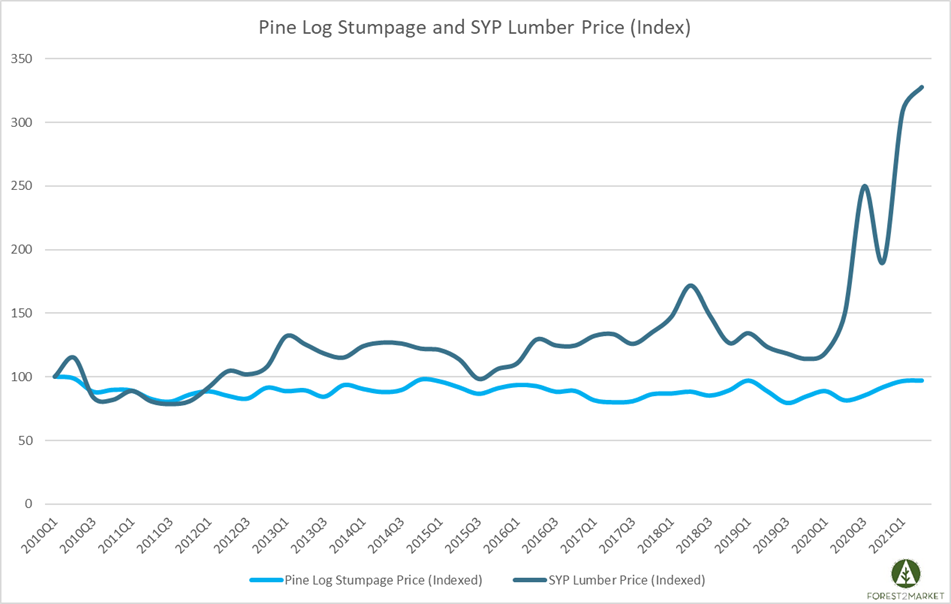