After experiencing a wild ride during 1Q2019, southern timber prices diverged by product type a year later in 1Q2020. It’s important to note that the price trends from this period largely do not include the impacts that the COVID-19 pandemic has had on regional stumpage markets, which will be more evident in 3Q and 4Q.

The overall trend of all timber products was up slightly in the first quarter of 2020, as the weighted average price per ton increased +2.8 percent. While all pine products were up, hardwood products continued to demonstrate a significant drop in price. 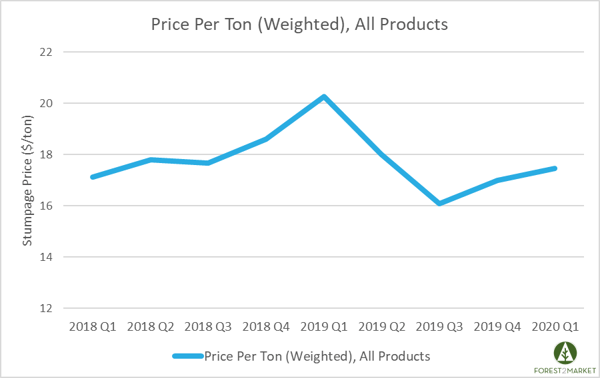 Hardwood pulpwood prices Southwide demonstrated a significant correction compared to pine pulpwood, dropping -14.2 percent during 1Q to $7.25/ton. The West-South region experienced the largest decrease, dropping by -30.0 percent to $6.55/ton, and the Mid-South decreased -1.8 percent to $10.73/ton. Prices in the East-South, however, jumped +14.0 percent to $4.08/ton. 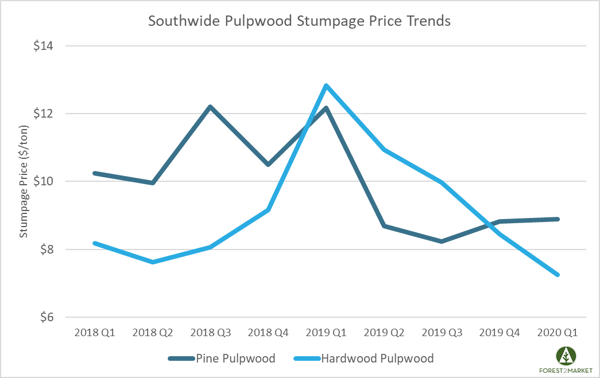 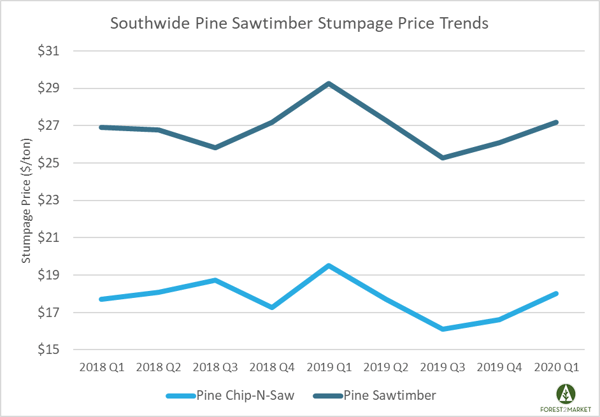 These numbers are noteworthy because they demonstrate a decrease in hardwood demand in a market that has been significantly impacted by the current trade and tariff situation with China. While new trade negotiations looked promising for the sector prior to the COVID-19 pandemic and resulting economic turmoil, hardwood markets will likely be stagnant for the interim. 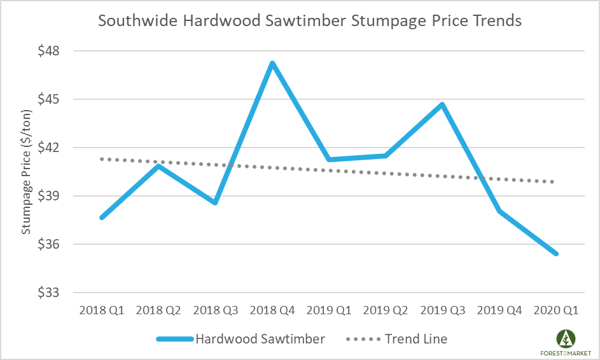 Real gross domestic product (GDP) decreased -5.0 percent in 1Q2020, according to the “second” estimate released by the Bureau of Economic Analysis. After revisions for 4Q2019, real GDP increased 2.1 percent. Additional revisions to the 1Q number will likely show further contraction, however, due to the COVID-19 pandemic, 2Q data will be shockingly dismal when it is released later this summer.

The pandemic, record unemployment, civil unrest and an increasingly contentious election on the horizon have combined to create historic levels of uncertainty… despite a high-flying stock market. Lumber prices have skyrocketed in recent weeks, a sign that demand exists somewhere in spite of an outright shutdown of the American economy since mid-March. However, this trend has been driven largely by tight inventories on the supply side. State construction economies are coming back to life and capacity expansions should soon meet the rising demand.

As Pete Stewart wrote last month, “It’s really difficult to predict what the housing market will do in the near term. New housing starts seemed to have really hit a stride during the first quarter of 2020 after the long, slow increase from the depths of the Great Recession. But we know housing demand is tied to employment, and unemployment is now at all-time highs. It’s too early to tell what percentage of those numbers will be temporary, but I suspect there will be some structural changes going forward that will result in higher unemployment than we have seen the last several quarters. In other words, I don’t think we’re going to be able to snap our fingers and go back to the way things were in January, for instance. It will be tough, no doubt, in the near term.”

As the fallout from the pandemic continues to unfold, southern timberland owners are now dealing with three challenging dynamics: 1) repercussions of the oversupply of both sawlogs and pulpwood that date back to the Great Recession; 2) slack demand in the current market, which is keeping downward pressure on prices, and; 3) near record levels of market uncertainty and a high-stakes election on the horizon.

Despite the overall positive price trend in the 1Q data above, stumpage prices across the South remain suppressed compared to historical levels. Demand will likely be muted for the next several months, and we expect to see increased downward pressure on timber prices well into 3Q.

Timber Prices
Southern Timber Prices Continue to Trend Lower in 3Q2022
Following a 15-year peak in 1Q2022 and a sharp decline in prices in 2Q2022, the weighted average price for southern...
END_OF_DOCUMENT_TOKEN_TO_BE_REPLACED

Timber Prices
Halt in Russian Exports, Reduced Demand in China Contributed to a 20% Decline in Global Softwood Log Trade
Global trade of softwood logs plunged by 20% during the first half of 2022 year-over-year (YoY). Much of the decline...
END_OF_DOCUMENT_TOKEN_TO_BE_REPLACED

Timber Prices
Hurricane Ian Threatens Stressed Timber Supply Basin
Hurricane Ian is slated to build significant momentum in the coming days as it crosses the western side of Cuba and...
END_OF_DOCUMENT_TOKEN_TO_BE_REPLACED